WHO could ever forget the Citroen Xsara Picasso, one of the least pretty vehicles to hit UK showrooms in the past decade or so.

It was a car that never wanted to go out unless it was dark, and even dealers realised it was so hideous they would have to offer big discounts just to get them off their forecourts.

But it served a purpose. It was cost effective motoring back in 1999 for the larger family and as such was popular.

But let’s look on it as the ugly duckling. Because now it’s morphed into a rather fetching, sleek, swan. The new C4 Picasso is a masterpiece of French motoring design, proving you can turn a glasshouse into a stylish piece of equipment people might actually WANT to buy for its looks above its undoubted practicality.

Yes, I like the new Picasso.  It has hints of Citroen’s past here and there – good hints, I hasten to add. It’s comfortable in that Citroeny upholstered sort of way, drives well and has a level of user-friendliness missing from cars that purport to be just that.

And for a relatively sizeable car with just a 1.6 litre turbo engine, it gives a good account of itself, with an acceptable turn of speed and plenty of torque available through the gears to make overtaking and pulling away from junctions a less nerve-jangling affair. Although I’ve got to say that yet again we’re faced with a set of fuel economy figures that in the real world few could get near (see below).

But it’s a car bristling with useful kit. The all-round view from the parking camera is a boon when manoeuvring although the C4 Picasso isn’t actually an excessively large car – it just feels a touch that way due to the acres of space inside. But in reality it doesn’t take up any more room in a car park than your average hatchback.

The driver’s seat belt is one thing you won’t forget in a hurry. Some cars have an audible alert, or a vibrating steering wheel, when you err from your chosen lane on a road. Citroen have fitted a vibrating seat belt which performs the same task – a weird feeling at first, but it does hammer home the fact you a) haven’t indicated, or b) you’re counting sheep….. 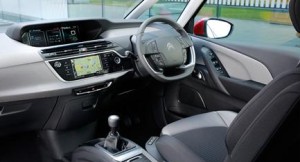 The huge front panoramic screen – unique in this segment of the market – has a small blind at the top edge which can be slipped up to make it ever huger. Coupled with the large sun visor you can either successfully shade yourself from the ultraviolets or marvel at the clear view of the planes flying overhead, as we did while stationary on the M25 near Heathrow.

The bright uncluttered cabin area will appeal to Picasso’s expected buyers – young families with kids, or older couples with grown up offspring. Perhaps even grandparents burdened with looking after the offspring of the offspring.

New C4 Picasso also features a range of innovations to make driving easier and more enjoyable, including;  360° VISION, an exclusive feature in the segment that uses four cameras to give the driver a bird’s eye view, rear view or panoramic front view through the integrated 12 inch screen. 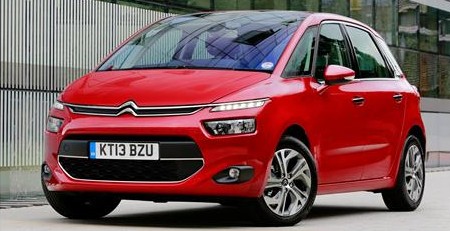