RATHER large estate cars aren’t really meant to be fun to drive but this modestly engine Mercedes-Benz diesel shoots the theory down in flames.

It’s a car with an awful lot of credentials under the bonnet, developing some 500Nm of torque from its 2.1 litre diesel engine.

Mercedes-Benz’s E250 CDI AMG Sport estate is a big car to move around but it does so with incredible efficiency. And very smoothly as well considering the power available.

And when I say big, I mean big. It doesn’t quite fit your average parking space, hanging out at the front, or the back, of a bit of both.

So you can deduce from that there is a fair old bit of space for the family or whoever else you’re carrying to relax in.

Not the sort of car to lug a load of rubbish to the nearest tip in, although it remains an option with its 1950 litres of carrying capacity with the rear seats down, a task accomplished by merely tugging the handle on each side of the rear load area to allow the back seats to fold down.

That’s just one of the nice touches you’ll find around the cabin of this executive estate.

It’s neatly finished and not garish in the way of some Merc products from the recent past. For example, the air vents have a degree of sublety about them, and the fit and finish has a top class feel to it.

All the prestige German marques have their ‘faster’ section – BMW have their M tag, Audi opt for RS on their quick variants, and with Mercedes-Benz  it’s the tie up with AMG.

It’s a tie up you’ll see more and more in M-B models. Originally an independent engineering firm specialising in performance improvements for Mercedes vehicles, DaimlerChrysler took a controlling interest in 1990, then became sole owner of AMG in 2005. 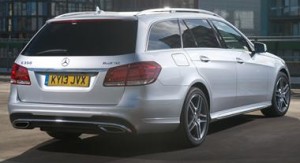 AMG models typically have more aggressive looks, a higher level of performance, better handling and improved stability than their regular Mercedes counterparts. The E250 CDI AMG Sport is a good example of that.

An AMG bodystyling kit is slapped on for starters to distinguish it from the crowd, with 18 inch AMG five spoke alloys another hint, before an array of comfort-inducing interior equipment is added, along with the full gammut of safety and security equipment. Mix in a few electronic toys like M-B’s COMAND online system with media interface and you’ve got an uber-classy estate with a pricetag of just under £41,000.

It’s a very accomplished piece of equipment, and surprisingly quick when you consider the relative lack of size of the engine under the bonnet.

For a very big estate car it handles beautifully. It’s not heavy in the steering department but feeds back what the front wheels are doing. It grips well, feels really well sorted and doesn’t show up any wallowy nature like you might expect something this long and wide to. That’s due to its Direct Control sport suspension which helps keep things nicely levelled out.

It cruises effortlessly on the motorway, but with its big tyres you’ll pick up a bit of road noise, though the engine itself is fairly well subdued.

There’s good clear instrumentation, with three dials ahead of you and the bulk of the switchgear neatly arranged in the centre console, beneath the seven inch colour screen.

The beauty of it is that while you’ve got the undoubted performance from the twin turbocharged engine, you’ve also got a very big economy card in your back pocket – its combined figure is a claimed 52.3mpg if you can resist the urge to give it the beanies. Pootling around town will invoke the stop/start system and stop you wasting fuel.

And if you can’t find the digital clock among all the information on the screen, it’s reassuring to notice there’s a good old fashioned analogue clock sitting right where they always used to, right in the centre of the dash. An added touch of class.