WHY did Vauxhall build the Ampera? Because they could. And at a stroke they banished the anxiety most of us feel over electric cars – their limited range.

Ampera combines an eco-friendly electric motor with a range-extending petrol-powered generator. It rivals hybrid cars like the Toyota Prius, electric cars like the Nissan Leaf and some of the more efficient diesel saloons on the market. 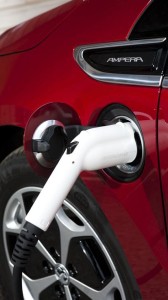 Its big plus point is it can travel for what at first seems a paltry 50 miles on electric power alone – independent research says that will meet the needs of 85 per cent of UK commuters.

If you are only mid-journey when the battery loses power a 1.4 litre ECOTEC engine kicks in, generating electricity for up to a further 300 plus miles, according to Vauxhall. Naturally, you can refill the generator’s tank at any petrol station, until you get the opportunity to charge the battery up again.

The 150ps electric motor gives an impressive 370Nm of torque, all of which is available immediately.

As a result, the pickup feels instantaneous – just what you want, with no bogging down as you move away. Ampera get to 60mph in under nine seconds and on to a limited top speed of 100mph.

It looks like a fairly big car but it isn’t on the inside. Rear passenger room is a bit cramped and there’s only room for four up, due to the big console between the rear seats. And it’s low at the front – as low as rattlesnake’s dangly bits, so take care over speed humps.

There’s a flimsy fabric luggage area cover that doesn’t actually hide what you may have underneath so it’s not much of a deterrent to passing oils who think what’s yours is also theirs…..

In fact it’s a bit of a marmite car for guests in the passenger seats – they either loved it or hated it, and to be honest the wacky imaging on the doorlinings and the hard plastics used on the dash you’ll either love or hate. It’s a bit in your face when you open the door – and that’s before you see the Starship Enterprise array of information on the instrument panel as you take your seat behind the wheel. 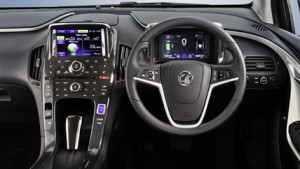 Press the power button and things begin to whirr as Ampera comes to life, but with a singular lack of anything audible. The drivetrain is silent most of the time, and even when the petrol engine is called into action, it stays impressively hushed.

The switch between the two modes is barely noticeable. It’s so subdued in fact that I almost collected a meandering OAP on the bonnet who didn’t hear the car approaching and that’s a bit of an ongoing problem with electric cars. Road and wind noise is well contained, so Ampera is a quiet and relaxed way to travel.

There’s lots of adjustment for the driver’s seat, so you’ll find a comfy driving position. You won’t find decent rear visibility easily, though, because the rear screen is tiny and the pillars are thick – a bit Honda Civic like. The dash has touch-sensitive icons on the fascia rather than buttons, which gives it a nice clean appearance, but they do take a day or two to get used to.

But probably one of the biggest drawbacks to owning one is the fact Ampera is eye-wateringly expensive, even after you subtract the £5,000 Government grant you get towards it. This model, the Electron E-Rev, will set you back £33,995 without any extras from the options list. I gather the latest model might see something of a price reduction.

But on the plus side its commendable efficiency means it’ll be peanuts to run if you rarely use the petrol generator. You’ll pay no road tax either.

The Ampera has a comfortable ride most of the time and it soaks up bigger bumps well.

And there shouldn’t be much reason to worry about reliability. The car comes with Vauxhall’s 100,000-mile unlimited period warranty, while the battery is covered by a separate eight-year/100,000-mile warranty.

Ampera comes with no less than eight airbags to help keep you safe in a crash, and the standard stability control should help prevent you having one in the first place.

And they all come well equipped, with two seven-inch displays, alloy wheels, a reversing camera and a DAB radio fitted as standard. 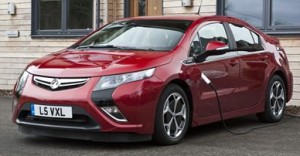