Porsche’s new Cayman created a lasting impression of a car that’s grown out of its shorts and is now ready to go toe to toe with its 911 big brother in long trousers.

It’s grown up to the point where you can understand why some sages are questioning why you would want to pay 30 odd grand more for a 911 – undoubtedly good as it is – when for around £40,000 you can have a whole heaping lot of fun in its Cayman stablemate. A car that to my mind has a better balanced feel and is less likely to have you filling up the bathroom laundry basket with indecent regularity. 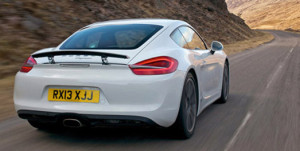 Its all round agility and ability leads me to pose this question – who needs a Bang and Olufsen system in a car? Or even a Harmon Cardon set up? Car fans the world over will agree that all that’s required is a small, inconspicuous button like the one you’ll find on the centre console of the Cayman. It depicts a couple of exhaust pipes, and thus, at your fingertips, is an absolutely blinding symphony of noise. The sort of noise that gets the hair on the back of your neck to tingle and your grip to tighten just a bit more on the steering wheel.

And while it might not be quite as swift as a 911, it’s no less exhilarating to drive but has the nod as far as I’m concerned when it comes to poise and, importantly, predictability.

It’s got a new chassis, longer wheelbase and less weight to lug around, having shed some 30kgs during its evolution from the mid engine rear drive car first launched in 2006.

It even comes with stop/start technology, not something you’d probably associate with a 164mph all out sports car. No sluggishness though – start up and go is instantaneous, with no holding back the 275 straining horses behind your left ear – that’s roughly one for each cc of engine capacity.

The impression of speed is heightened by the fact your rump is closer to the ground than in most cars. 5.6 seconds to 62mph may seem on the face of it modest for a machine like this, but it’s an involving five and a half seconds, rest assured.

Inside the high quality interior, the driver has a great working environment. The paddles on the steering column allow you to change when you want to, thus invoking some great blips from the exhaust on down shifts, in addition to the sound it makes under brisk acceleration.

Porsche-Doppelkupplungsgetriebe (PDK) is a double clutch seven speed gearbox available as an option and fitted here. It was first developed by Porsche for motorsport some 25 years ago so drivers could keep both hands on the steering wheel at all times – a handy attribute.

The larger rear boot-lid offers better access to the cargo area, and luggage capacity of the two-seater has been increased by 15 litres to 425 litres when loaded to the roof. 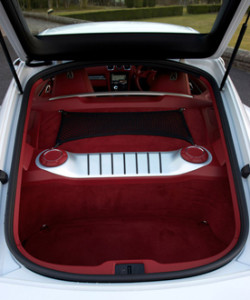 An eye-catching feature is the new aluminium panel that extends across the engine compartment cover between the two filler caps for coolant and oil.

Cayman’s a car that’s going to continue to tread on the coat-tails of the 911 for some time to come.