BENTLEY. The epitome of British Racing Green, the legend forever linked with those heady days of the 1920s when the Bentley Boys went racing in France and trounced the opposition. And then quaffed a large G and T or six afterwards.

Magnificent cars then, and they still are today.

This week we find ourselves in the Continental GT Speed, a car that is the latest in a long line bearing the same name because it was on the wide open stretches of continental Europe that company founder W O Bentley used to test the capabilities of the cars he built. It’s their performance flagship and the fastest ever production Bentley.

Let’s start with the engine, shall we? A six litre twin turbo W12 configured powerhouse that’ll purr round town contentedly for as long as it takes you to get to a bit of open road. Then, when you sink the pedal into the plush carpet, it slips down a gear of two through the silky smooth auto box, the bonnet rises an inch or so, the air begins to rush through that distinctive mesh radiator grille and and you are introduced to 616bhp of sheer power. And it’s a short introduction. You’re passing 60 in a straight four seconds and if allowed could go on to 205mph. Mmmm.

That makes it a car that not only can you watch the fuel gauge needle go down, you can almost hear the motion potion being sucked through the pipes.

The big all-wheel drive Bentley does its job with a poise and balance that is the antithesis of what the deep and evocative sound coming out of the exhaust would lead you to believe. Nothing wrong with an assault on the eardrums, of course.  It hints at uncontrollable pace but the opposite is true. You can drive a Continental quickly and know that it will behave impeccably when the tarmac goes left or right, and it has a braking system that you just know will bring you safely to a stop without any undue histrionics. And if you’re wavering on that one, you can add another £10,405 to the list price by adding carbon ceramic brakes to the package. Well, what’s another 10k on a beast listing at £152,600?

Even the stereo system was a near-£5000 upgrade but I’m afraid I can’t tell you if it was any good or not because I hardly had it on – I preferred the inbuilt soundtrack of all that mechanical effort channelling itself out of the massive rear tailpipes.

At that price, prospective owners are not going to be too worried about the cost of filling up the 90 litre tank, nor the fact that a gentle cross country run will see you eke out just over 20mpg at best.

There’s no sloppiness in anything it does, but you’re always mindful of the fact this is a big and heavy car, through across country it takes on a more nimble feel altogether.

A build up of non moving motorway traffic gives you a good opportunity to relax and enjoy the fixtures and fittings of the Continental GT Speed. Leather, chrome, thick carpet – all the good things in motoring life are brought together in a sumptuously comfortable cabin that is right up there among the best money can buy. The craftsmanship is unquestionable. 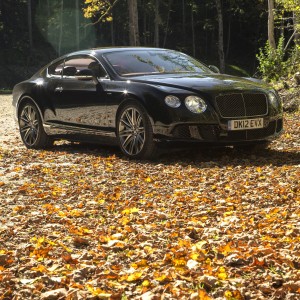 You just can’t overlook that peerless build quality that the Crewe factory is renowned for in gentlemens clubs the world over. Even the handbook in the glovebox is a beautifully finished leather bound volume.