THE myth of the Yeti was shattered a long time ago. No longer are they one of the unseen wonders of the world – we’ve all spotted one at some time or another.

Thanks to Top Gear and one J Clarkson, everyone wanted the four wheeled variety as sold by Skoda, meaning in actuality they were kind of a rarity as the waiting list grew and grew.

Thankfully it’s now down to a relatively respectable three months – good news for the Czech arm of the VW Group, because they could be set to go through the same supply and demand shenanigans as before. 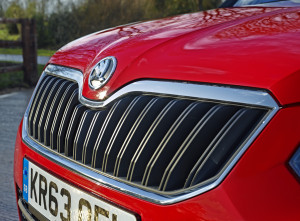 The reason being there is not just one Yeti in the sales brochures now but two – so there’s an even greater choice for fans of this highly adaptable and user friendly mode of transport.

It arrives in the UK at a time when thing are most definitely on the up for the Milton Keynes based importer.

They’ve just had their fourth record year here with over 66,000 sales  – up 23 per cent to take just under three per cent of the market thanks to cars like the Octavia and the Yeti.

And with the A segment SUV area of the market growing a whopping 108 per cent in the past six years, there are obviously rich pickings to be had if your product is good.

And yes, the new 2014 Yeti is an improvement to take on its main rivals – Kia’s Sportage, the Hyundai ix35 and Nissan’s all new Qashqai.

Its latest adventure starts with two variants – Yeti and Yeti Outdoor, the latter with its own distinctive styling that gives it a slightly more rugged look but with prices that are exactly the same model-for-model as its stablemate and which start at a reasonably competitive £16,600. 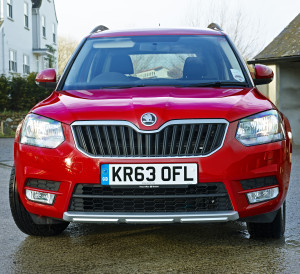 The facelift is obvious yet subtly different – gone are the trademark big round lights that gave it its cheeky character, replaced by foglights sited lower in the front grille in a look that has ‘precise edges, crisp lines and bold curves’. Or a softer, less in-your-face look if you like.

Still evident are the excellent practicality and proportions of the original Yeti, helped in no small part by Skoda’s excellent Varioflex seating system and its mpv rivalling flexibility. The three rear seats can be individually folded or removed completely. Bo0t capacity is either 510 litres or a whopping 1760 litres with the seats out.

The revised interior gets an update, the dash featuring new trim inserts and a three spoke multi function steering wheel, while new fabrics and seat options freshen up the comfort side.

The ranges kicks off with the highly impressive 1.2 TSI petrol engine. Anyone thinking that’s too small for a decent sized car take note: it’s not and it copes admirably well.

A variety of Diesel engines are also available, including the decent 1.6 in the Yeti Greenline II and its relatively clean 119g CO2/km.

Four wheel drive is very much to the fore in the Yeti Outdoor and it employs the very latest fifth generation Haldex clutch system. Very ably demonstrated to us in a highly wet and boggy Gloucestershire field. So it should cope with kerbs outside primary schools with ease….

Just watch those doors sills though. They’re high, attract dirt and are just waiting to catch out an  unsuspecting trouser leg as you get out.