FANCY a bit of extreme motoring? Then Audi’s blisteringly quick ‘light the blue touch paper’ TT RS is the car for you.

It’s a car that has been successively honed and improved since its debut in 1999  as a real jaw dropper – so much so that there was a hefty trade in left hand drive models from abroad for those who couldn’t wait to get behind the wheel of a pukka RHD version.

So, various guises and configurations since then, and there’s another one on the way before too long.

This currently is the pinnacle of the range – and any Audi that carries the RS badge is going to be a bit special. They’ve been loyal over the years to that classic two door coupe shape, apart from the odd nip and tuck, but it’s underneath where things have moved on apace. 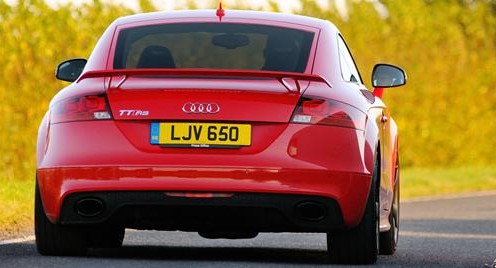 One of the very best five cylinder engines around provides the forward impetus, of which there is a significant amount, and it’s all kept well under control by Audi’s excellent quattro four wheel drive system, aided in this instance by the option of Audi magnetic ride which does clever things to the dampers and springy bits underneath.

Take your place behind the wheel and the trademark three central vents are still there in the elegant cabin, where two can sit in complete comfort. There are a couple of seats in the back but the lack of legroom and the sloping roofline mean that God hasn’t actually created anyone who can comfortably sit there, unless you’re a toddler with a need for speed.

There’s no skimping when it comes to an Audi cabin and it remains one of the best around for fit, finish, and overall quality. Chrome surrounds to the main areas of the dash and the doors add a classy touch.

One of the big plus points about the TT is that it offers sports car motoring for the masses. Well, at the start of the range it does, with a kick off point of £22,163 for a 1.8 TFSi Sport, though for TT RS performance you’ll have to cough up a shade under £50,000 – Porsche Cayman territory.

It’s very subdued as you amble along, and at a steady pace the only discernible sound is the swish from the heater blower. 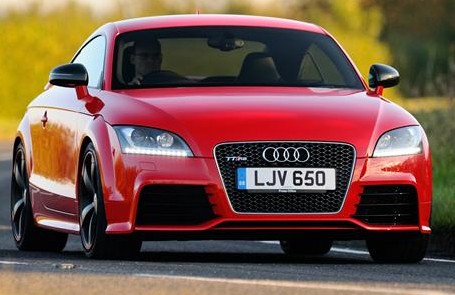 But plant your right foot and there’s an evocative growl as the gases start to pumps out of the huge exhaust pipes. The sort of music to your ears that people pay big sums to hear at a concert but which you can have every day of your ownership of this blend of performance, style and comfort. That surge of power is available from just 1650rpm, and seems to go on and on.

With phenomenal levels of grip, the TT RS comes with a large wing across the rear, a neat set of carbon fibre door mirrors and some rather large alloy wheels to set it apart.

In normal use you could never describe the TT as noisy. That changes when you switch to warp factor mode, and the sounds levels build in proportion to the speed you’re moving at.

One of the downsides though is that being as low as a rattlesnake’s gonads to the tarmac means you can, if you’re unlucky, become invisible to the plethora of foreign lorry drivers that ply their trade on our motorways. You need your wits about you in among that lot….

It might not be the most practical car you can buy but there’s no denying its style and image. And hence it’s continuing desirability. 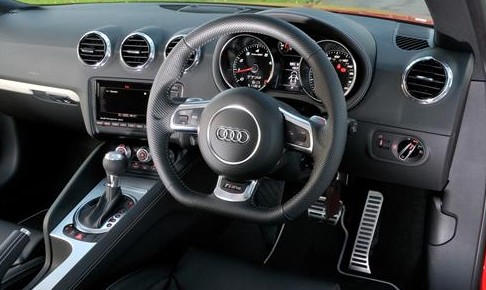