Skoda’s latest model to hit UK shores could quite adequately sum up the Czech firm’s progress over the past few years – rapid.

Enjoying rising sales in a period of doom and gloom is not to be sniffed at, and their latest model revives a name that first appeared on one of their cars way back in 1935. 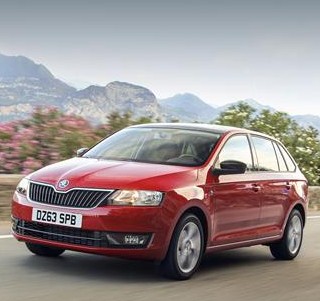 Rapid Spaceback is a reworking of a model only launched a relatively short while ago, but it’s given it a real shot in the arm. The look – and hence the desirability factor – has been vastly improved by giving the rear end a bang tidy makeover.

The subsequent neat shape has more going for it than the cooking Rapid – a competent enough car but not one that warrants a second glance in a car park, as opposed to its stablemate.

Rapid is the seventh Skoda in their current lineup – the very first time in fact that they have had seven models on sale at one time – and hits the ‘price sensitive’ sector of the market with prices starting at £14,340 (1.2 86ps S spec). For that, you get a car displaying almost Octavia-like dimensions and Superb proportions for rear passengers.

Here are a few things to look out for though….

The centre armrest is handy but it gets in the way when you’re trying to lock your seatbelt buckle into place. To avoid frustration, it’s best stowed vertically out of the way.

The full length panoramic roof (£700 extra or as part of style pack, £1,100 option) is a great addition to the spec of this model, but the blind is split in the middle and has to be operated manually, which on a car costing the thick end of £19,000 is, to me, penny pinching. 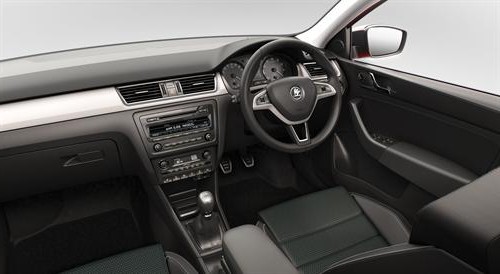 You wouldn’t realistically expect the interior of a Skoda to have the same sort of classy premium interior you’ll find on other VW Group products. But this one has. The dash deserves mention here, its straight functional lines giving it a smart user-friendly appearance, the top area being black to cut down reflections on the screen. Well equipped and well finished – a handy accolade.

It’s a car with a very definite accent on space, and the boot will serve you up a useful 415 litre of storage should you need it.

And in a world where greys, dark greys and white seem to be the colours of the moment, it’s refreshing to note Spaceback comes in an assortment of vivid hues – a dekko at the brochure confirms a choice of 13 colours, some of them truly eye-catching ….

If we’re not giving new cars a verbal kicking that’s because basically there’s no such thing as a truly bad car these days.

A quantum change from the days when I first started writing about them – then they came along with almost monotonous regularity and with base models that were about as well equipped and luxurious as a tramp’s cardboard box..

There wasn’t such a vast choice to pick from then, but while you might not be interested in every new car than comes along these days, isn’t it great living in a world where you actually DO have a wide choice?

So, from bargain basement to success story – that’s been Skoda over the end of the 20th century and start of the 21st. No one laughs any more, do they?