IT might not have had a rear wiper when it first went on sale, but it wasn’t long before the new Hyundai i10 was wiping the floor with some of its serious opposition.

Now there’s Son of i10, and it’s an even better proposition for anyone looking for a small, tidy, well equipped family car.

The New Generation i10 has already won plenty of plaudits for its much improved refinement and zappier styling.

This one came in Sweet Orange (part of their ‘rainbow of zingy colour choices’), which you’ll either love or want to steer clear of. Because the colour makes regular appearances around the interior as well – right across the dash, the seat inserts, it’s everywhere and in your face. But while  that may appear down market, there’s a definite premium feel to the package – but without the premium pricetag, obviously, as this is a Hyundai.

It drives well, it has steering that is light, efficient and confidence inspiring. it’s comfortable for all occupants and it won’t cost you the earth. Think eight and a half grand for starters.

And don’t forget that being a Hyundai, it comes with a five year unlimited mileage warranty package, which you can pass on to subsequent owners if you don’t notch up the full term yourself.

What we have here is a little car capable of doing the business round town for its owner. Its four cylinder 16 valve engine  of 1248cc gives out 86bhp and its torque figure of 120Nm makes it eager to get off the mark. Bit too eager at times, when the lightness of the controls (pedals, gearchange) can have fellow motorists thinking it’s a bit quicker than it actually is.

Its 109mph top speed is adequate enough, and its light and positive steering deals adequately with town driving.

It doesn’t suffer unduly from road noise and the level of handling they have built in to the chassis means it can go about its business without unsettling the occupants too much.

i10 has a long wheelbase, meaning there’s decent  interior space and also gives the ride and handling characteristics of a far larger car.

And even thought the engine is at times working hard, what’s happening under the bonnet is fairly well insulated from the interior. It’s certainly no worse than any other vehicle in the city car class – and much better than some.

The interior is neatly laid out with clear instrumentation and dials that are easy to use. And for your money you get the good things in motoring life like air conditioning, electric windows, tinted glass, centre locking, a plethora of air bags and an RDS radio/CD/MP3 with plenty speakers.

You don’t get alloy wheels in its £9795 pricetag (1.2SE 87ps), but there’s precious little else you need to add to the package. 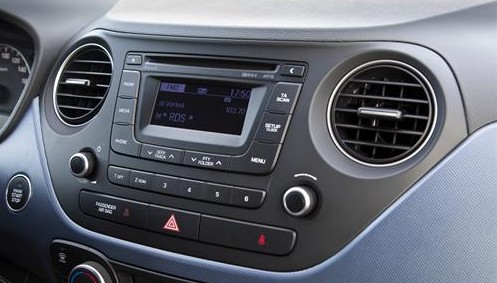 In use the i10 is an eager little worker and even though it has compact overall dimensions space is surprisingly good, even for people like me on the wrong side of six foot four. You might feel a bit like you’re wearing it, but, horses for courses, it’s a ideal option for Mr and Mrs Average-Family – a full five seater and with a decent load area when you fold the rear seats down.

The fact you see so many on the roads is proof, were it needed, that Hyundai got it right when they drew up this model.