COULD any self-respecting non-Arsenal footy fan ever consider buying a car called the Venga?

Actually, there are probably some Gooners who wouldn’t buy one either at the moment, but they’d be missing a trick.

Because Kia’s family orientated supermini currently has the edge when it comes to results. It delivers on pace, practicality, efficiency (in terms of fuel), and as it doesn’t do a lot wrong, there’s not a lot of need for excuses…..

What you see is what you get with the Venga, and that’s probably why you see quite a lot of them around.  It’s become, in a relatively short space of time, a popular and spacious small family car, and while maybe it doesn’t stand out from the crowd, its styling is certainly worth a second look in a marketplace where plenty of its competitors are worthy but somewhat dull.

The profile is certainly a bit racier than other tall passenger-friendly small cars.

Its clever packaging gives it the interior space of a C segment car but with the on-the-road footprint of a typical B segment vehicle.

Kia call it their quart-from-a-pint-pot car, citing its ability to serve up family space and safety with a high level of efficiency and low running costs. 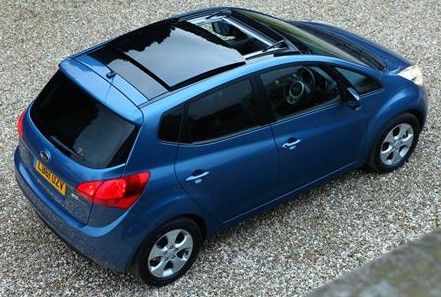 It comes with EcoDynamics, Kia’s fuel saving CO2 cutting technology on all but one in the 13 model range.

And it also comes with the full box of safety features including Vehicle Stability Management and Emergency Stop Signalling, which flashes the high level brake light during an emergency stop to warn drivers behind.

The engine (a 1.6 diesel here) and six speed gearbox work well together, but the first round town trip didn’t hint that was going to be the case. The gearchange seemed stiff and not exactly in sync with the rest of the mechanicals, but a longer outing put that one firmly to rest, the Venga displaying a smoothness of operation that certainly wasn’t evident on first acquaintance. You might not normally get a second chance to make a first impression, but the Venga got it right second time of asking.

It has well sorted chassis dynamics (it’s based on the platform that’s also used for the Rio and Soul) that help to give you an assured smooth and effortless romp through the countryside, and a comfortable ride round town as well. 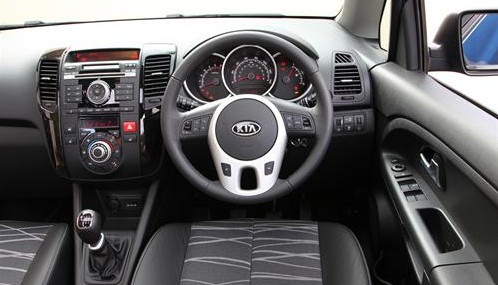 There’s a relatively high driving position, almost van like, as your knees are bent more than would normally be the case, but the level of comfort for the occupants is considerably better than van like. The cabin is light and airy and the equipment levels are on the generous side.

Sit in any of the seats and you’ll appreciate how roomy it is – and on 3 spec versions, very light and airy thanks to the electric panoramic sunroof that covers most of the roof area.

The split rear seats that slide fore and aft let you maximise the passenger space when maximum luggage capacity is not needed.

Trim levels offered are Kia’s customary 1,2 and 3, with 3 as sampled here offering a choice of 1.6 petrol or diesel engines as well as climate control, part leather upholstery, heated front seats, and an optional sat nav system with an integrated reversing camera.

And of course, sitting high up the tick list is that industry-best seven year warranty. Almost as long as Arsenal have been trophy-less….