THINGS are stirring in the garden, but after a dry spell of a couple of days, it’s hammering down with rain.

Not just any old little shower, mind you, but the sort that hurts your face as it drives into it.

Must be time to test a cabriolet then, and with ill-advised optimism, and impeccable timing, Audi’s neat new A3 Cabriolet arrives on the drive for appraisal, at around the same time the first UK customers were getting their cars.

But does the inclemency of the British weather put us off driving vehicles like this? 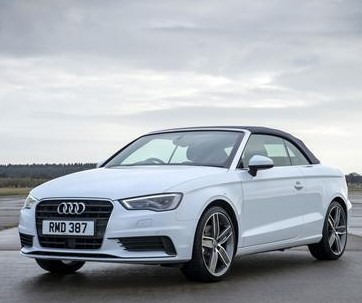 Not a bit. In the UK we’re avid fans of convertibles. And when they’re as overtly classy as this latest incarnation of Audi’s compact rag top then it’s no real surprise.

Actually, compact isn’t the word to use here because while it’s smaller than the A5 cabriolet, it looks seriously larger than the original A3 it’s taking the place of, based as it is on the new A3 saloon.

Gone are the roll hoops head restraints in the back, to give a seriously smart and tidy look, finished off by that trademark aluminium band around the car that made the A4 cabriolet such a looker. Brought me in mind of my dear departed A4 cabriolet in fact – the metallic scuba blue paint of this test car was so similar to my morro blue example and to my eye the new A3 has a very similar look.

I like the fact that Audi have remained loyal to the fabric roof school of thought, and this one proved as cosy and well insulated as anything else we’ve tried in recent memory, and it certainly has a bigger on road presence than the original A3 I drove on some excellent French country roads on its launch back in 2008.

The new car is, as you’d expect, impeccably put together and feels so solid with no real sense of any undue vibrations with the roof down. And nor should there be on a car costing £27k plus, and with a pedigree of being well assembled. There’s nothing heavyweight about the A3 Cabriolet with its smart grey fabric folding roof and distinctive Audi family grille.

The obvious beauty of the package is that, should the sun peep through the clouds, you can drop the top in just under 18 seconds, and you don’t have to stop to do it. Just make sure you’ve dropped the speed to below 31mph or less.

When retracted at the touch of the button, the top – complete with heated glass rear window – rests in a tray that barely affects luggage capacity, which amounts to 275 litres.

What impressed was the rigidity of the chassis. Very little flexing, and that means the suspension can do the work that it’s there to do and provide you with smooth forward progress.

The economy champion in the new range will be the six speed manual 2.0 TDI with 150PS, offering combined fuel consumption of 67.3mpg and CO2 emissions of 110g/km. It complements its frugality with an impressive 8.9-second 0-62 mph time and a 139mph top speed.

As a package it successfully combines the top-down fun of a roadster and the day to day useability of a fixed roof premium class car, the canvas top is that good.