THERE’S a new arrival in the SEAT Leon household, and the new baby is the biggest yet to pop out of the Martorell mothership in Barcelona.

The ST effectively completes the family, alongside the five door hatchback and three door SC variants, and lives up to its billing as one of SEAT’s most significant models ever.

New from the ground up, It follows its already extremely successful predecessors by combining what many judge to be the best looks in the segment with great driving dynamics, great value and exceptional quality.

Its arrival gives the Leon a broader appeal and thus is expected to reach a much wider customer base.

When I tested the then new hatchback last year I ask the question, would I buy one? I could be tempted, I wrote. And I was.

Leon is certainly a car that has the credentials to set the tone for a successful future for SEAT and showcases a new level in quality for SEAT interiors. Soft touch plastics, an exemplary fit and finish and good visibility thanks to thinner A pillars than the norm make the drivers seat a nice place to be.

And because Jose and his team of engineers have been so closely involved in the development of the VW Group MQB platform on which the Leon is based, it’s helped to give it a well balanced feel and greater stability out on the road, which is good because the UK is the biggest export market for Leon and if any roads are going to show up serious imperfections in the way a car is set up, it’s ours. Thankfully the Spanish newcomer passes the test.

Pushing the wheels further out to the corners has boosted the stability – which wasn’t actually that bad in any event on earlier versions – and makes the handling just that bit sharper too.
Also new to Leon is SEAT Drive Profile, which brings active chassis technology to a SEAT model for the first time and allows drivers to select between three distinct driving modes, plus an individual setting. 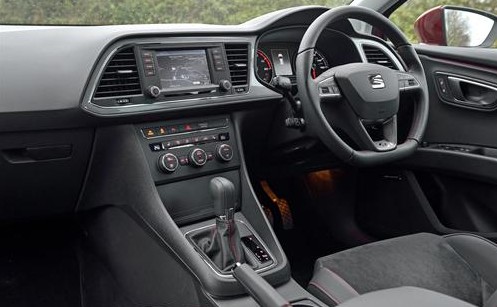 Available on this FR spec ST test car, it’s there at the touch of a button and makes adapting to the conditions – and your mood – a simple operation.

Estate cars of old used to be utilitarian things without much on the way of creature comforts or usable extras. Not the case in 2014, where you’ll find seats that fold flat, an illuminated boot with cargo rings, a 12v power supply, a tonneau cover to hide your goods and chattels from prying eyes, and a double boot floor for added security and where the space saver wheel sits.

Uber neat ambient lighting in the door cappings – red here – gives the interior a warm and cosy feel on a dark evening, and sits nicely with the red accent of the instrumentation and switchgear. White numerals on black dials for the main dials makes for a good clear view of what you want to know.

And there’s an easy to use central touch screen which brings the necessary buttons at each corner into view as your finger nears the screen. They’re not visible otherwise, so you get a full view of the map most of the time.

In 2.0 TDI 150ps guise, as sampled here, you’ve got a car that comes in at under the 120g/km CO2 mark so only cost 30 quid a year to tax, has a claimed fuel return of 65.7mpg yet will get to 62mph in under nine seconds and hit, if allowed, 131mph. All in a stylish and adaptable package. Sounds like the best of both worlds, doesn’t it?