JAMES Brown had soul. Motown had soul – by the warehouseful. And Kia’s got Soul, in the shape of their updated compact SUV crossover.

And they’ve also cornered the market in buttons. I don’t think I’ve ever counted so many inside a car.

For the record, there are 16 alone on the steering wheel, five each on either side of the big sat nav screen plus a couple of knobs, and another 10 plush one big control knob for the heating and ventilation.

Did I mention the drivers door? No I didn’t, did I? Well, there are another eight there as well. Quite a collection. 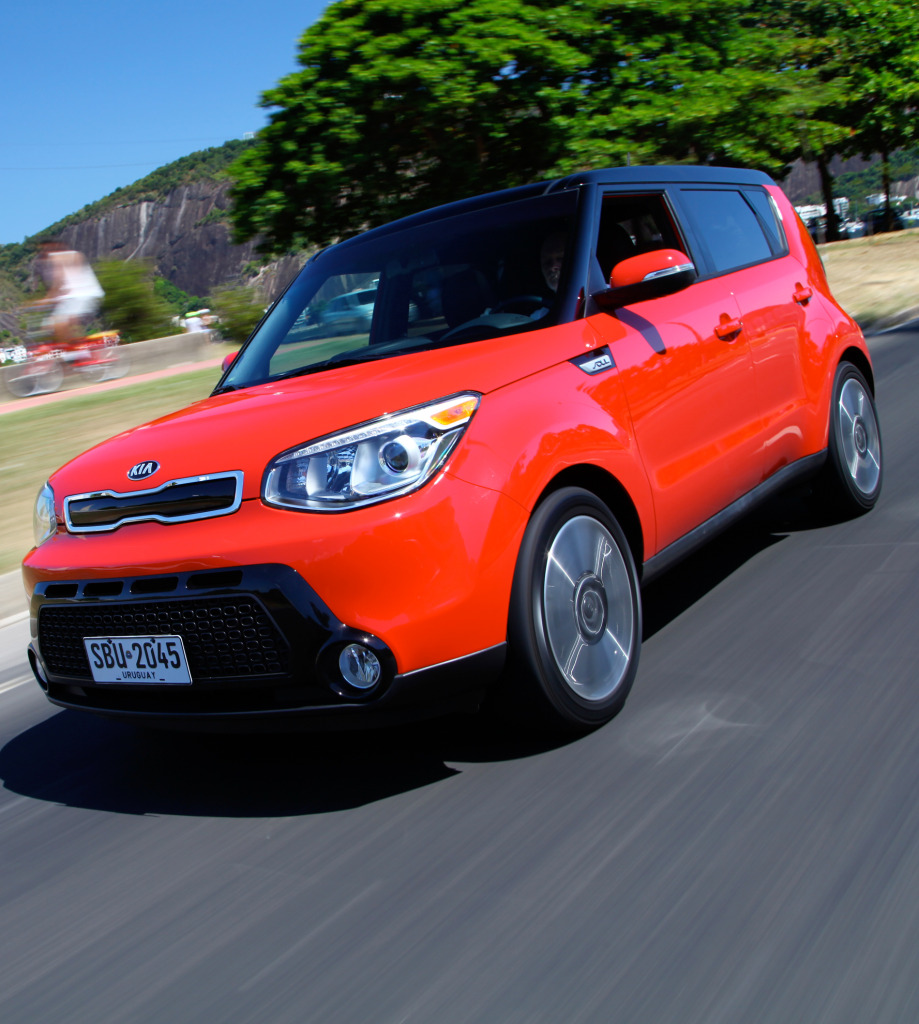 Kia’s latest model to tempt the pounds from your pocket has a unique shape – and in this instance, a fairly stand out bright red finish, giving it the appearance of something Postman Pat might drive around in….

The Kia Soul is definitely a deviation from the norm. It’s a bit of an image shift for Kia, a departure from the normal product line.

The all new second generation Soul has more space in its higher quality cabin and a new chassis based on the Kia cee’d which itself is a pretty decent bit of equipment.

It’s an SUV lookalike, it’s true, with five doors, five seats and a price tag of £17,500 if it’s the 1.6 diesel engined Connect Plus model you’re looking at.

That’s the one under scrutiny here, a free revving unit that belies the somewhat chunky looks that lead you to believe the Soul might be a bit lethargic. 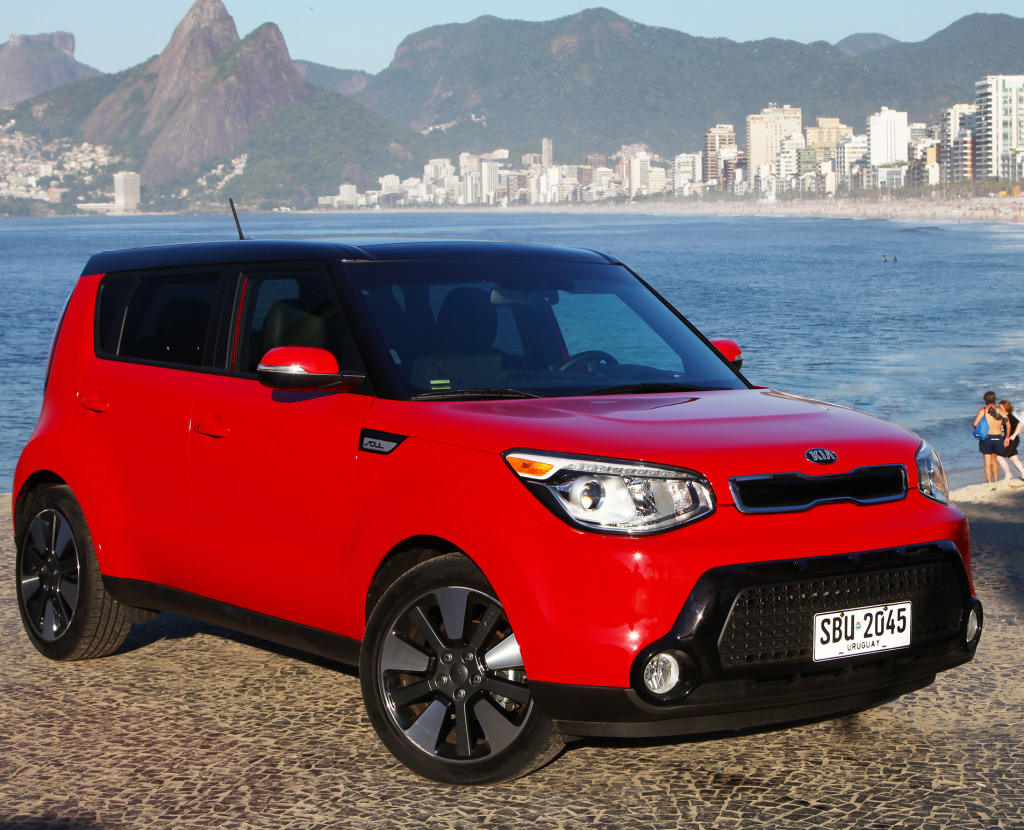 It isn’t. It has a lightness of touch in all the major controls that makes it a great around town car. The 1.6 here develops 126bhp at 4000rpm and its torque figure is a healthy 260Nm@1900-2750rpm. That equates to a car that is willing and eager to get off the mark.

All versions are front wheel drive and five door – Kia’s research dug up the fact that while buyers want the appearance and higher driving position of a 4×4, but weren’t fussed about the higher fuel consumption and tax that comes with four wheel drive.

Tough but not rough sums it up. It’s got bold, almost aggressive looks, but under the skin it’s a very user friendly car, with light handling characteristics that will suit most drivers.

There’s a high bonnet line with bulging wheel arches and a roofline that slopes gently down to the tailgate. The high roofline peaks just above the windscreen which helps give an airy feel to the interior which is in any event pretty roomy.

Even with the seats fully back there’s adequate legroom for the rear seat passengers, and with the Soul being on the tallish side it’s an easy car to slip in and out of as the seat squabs are correspondingly higher than on a normal car. 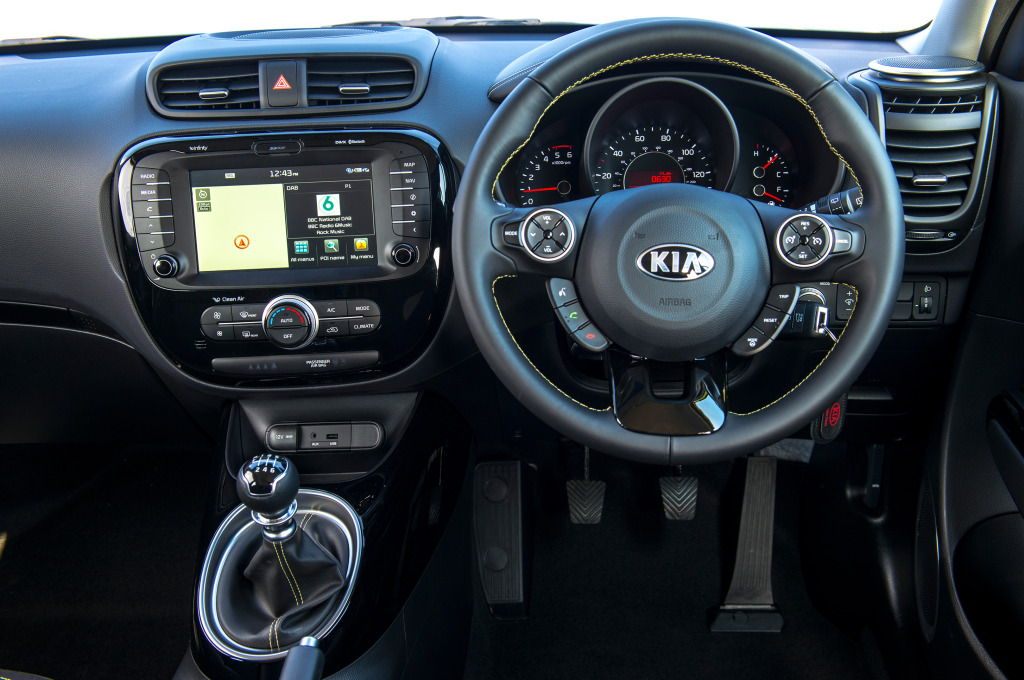 There’s a goodly amount of standard kit including lots of shiny piano black trim in the cabin, a DAB radio, keyless entry, air con, electric windows all round and Flex Steer variable power assisted steering on all models. Connect Plus adds Bluetooth, a reversing camera that is like watching a crystal clear wide screen TV on the dash, a premium Infinity sound system, sat nav and front speaker mood lights, which (thankfully) you can switch off.

It also comes with Kia’s Flex Steer, that lets you adjust the degree – Comfort, Sport or Normal – of assistance according to pervading conditions.