A FEW damp laps round a racetrack can do little else than whet the appetite for a car that has undoubted performance on tap – but what’s it like to live with one for a week?

SEAT’s latest Cupra model, crafted into the three door Leon SC bodyshell, wears the badge of being the fastest and most powerful car the Spanish manufacturer has ever built – but while its get-up-and-go credentials are unquestionable, so is it’s ability to behave as sensibly and sedately as any of the other offerings in the Leon range. You just don’t want it to.

For here is a SEAT that briefly held the record for the fastest front wheel drive car round the legendary Nurburgring track in Germany. A car that will set loose a cavalry charge of 280 horses from under your right foot, but which has high performance ventilated discs with big red calipers to rein it all in.

The powerhouse performance is possibly not a great deal of use on the M25 or any big city ring road, when the Cupra can be and is as docile as the rest of the traffic, but it’s good to know you’ve got it in your back pocket for when the roads open out and the traffic thins….

A decade and a bit on from the first Cupra model and they’ve produced a car that’s the embodiment of ‘auto emocion’ – SEAT’s catchphrase. 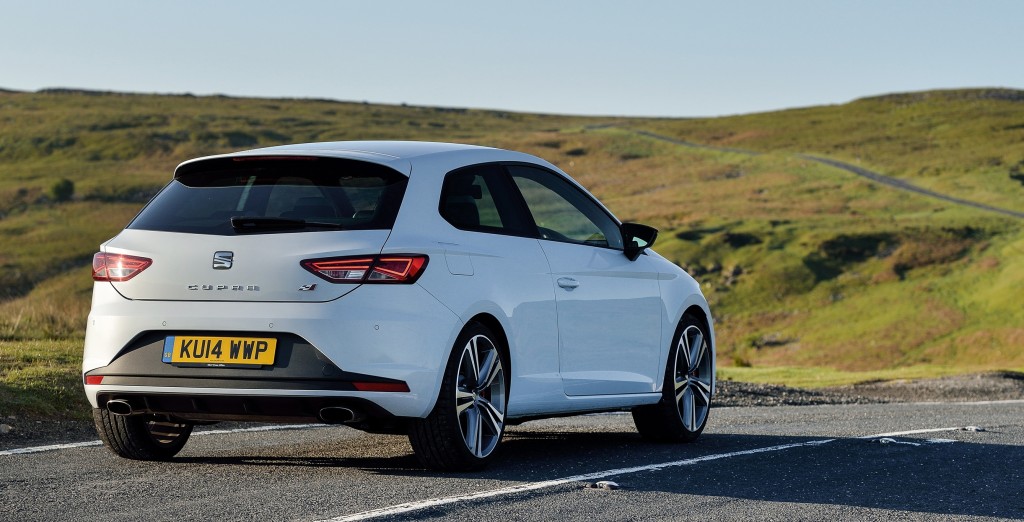 The Golf GTI might be the ‘must have’ for many petrolheads, but the Leon Cupra has built up no less of a cult following.

Built on the same VW Group platform, it’ll out perform the Golf on all the figures, be they price or performance.

And yes, it’s equally at home being used as an everyday family car if that’s the drive mode you’re in at that moment in time. And as such it’s available as either a three door SC or five door hatch, displaying a potent mix of Spanish flair and German quality. 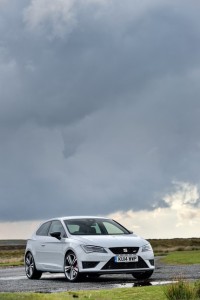 The response is immediate, the handling sharp and reassuring and interchangeable via the onboard Cupra Driver Profile, accessed via a switch on the dashboard.

It gives you active suspension management using the new DCC Dynamic Chassis Control system. The options are Comfort, Sport, Cupra or Individual and out of the lot the Cupra setting ticked my box for the assault on the eardrums alone. 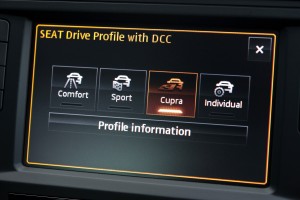 If the first three don’t float your canoe then Individual allows you to pick the best from the rest to compliment your own driving style.

Around town the lower speeds involved give you just that little bit more time to appreciate the interaction between the bits that make this such an impressive performer, at a time when it’s operating in a smooth, refined, unflustered manner. It slips through the DSG auto box with ease – commendable for a car that can hurtle its way to 155mph and reach 62mph in a mere 5.7 seconds.

Its 350Nm of torque gives it a lusty spread of power from 1750rpm to 5300rpm – fast and safe overtaking is never an issue here.

It comes with a front axle differential lock that improves the traction and handling, and means that torque steer in non existent. But you can still elicit some serious noises from underneath as all the bits combine to negate the effects of a very heavy right foot and scrabble to put the power down on the road. 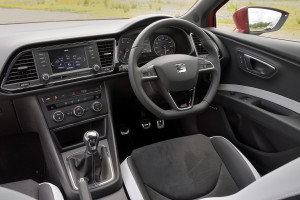 Back in 1950, when the company was founded SEAT was responsible for getting the Spanish off their donkeys and, slowly but surely, into cars like their original 1400 model.

They’ve come an awful long way since then….