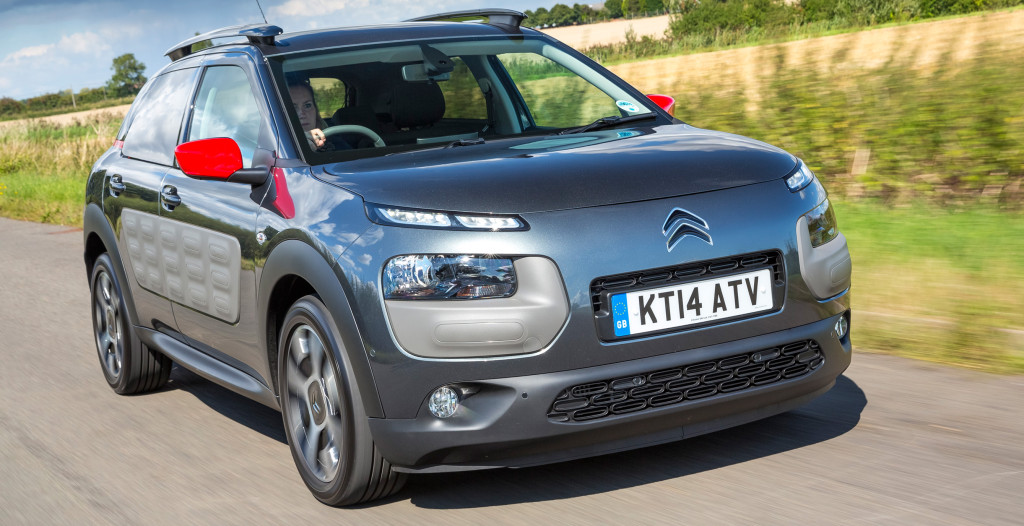 WHEN they set out to do something a bit different you can’t say Citroen don’t come up trumps.

The Picasso was a case in point. Probably the most aesthetically challenged MPV to hit the roads, it became an undoubted hit for Pierre and his pals.

Daring to be different, they seem to have another winner with their C4 Cactus – the wacky offspring of a design team that put pencil to paper only AFTER a long liquid French lunch.
How else would you end up with a car that gives you the option of washing it or dry cleaning it.

Actually its Airbump protection panels are very practical but the first one I saw looked like quilted padding – and until you fully appreciate why they’re there they do look a bit superfluous.

But that’s one of the endearing qualities of the Cactus. It doesn’t set out to be a normal run-of-the-mill hatchback. Which is good, because it isn’t.

Yes, there’s plenty of room inside the ultra Citroeny interior – soft, cozy, wallowy and comfortable. In fact the wide front seats are a bit too soft – you sit in them rather than on them – and its looks will have you either loving it or, like marmite, giving it a wide berth. 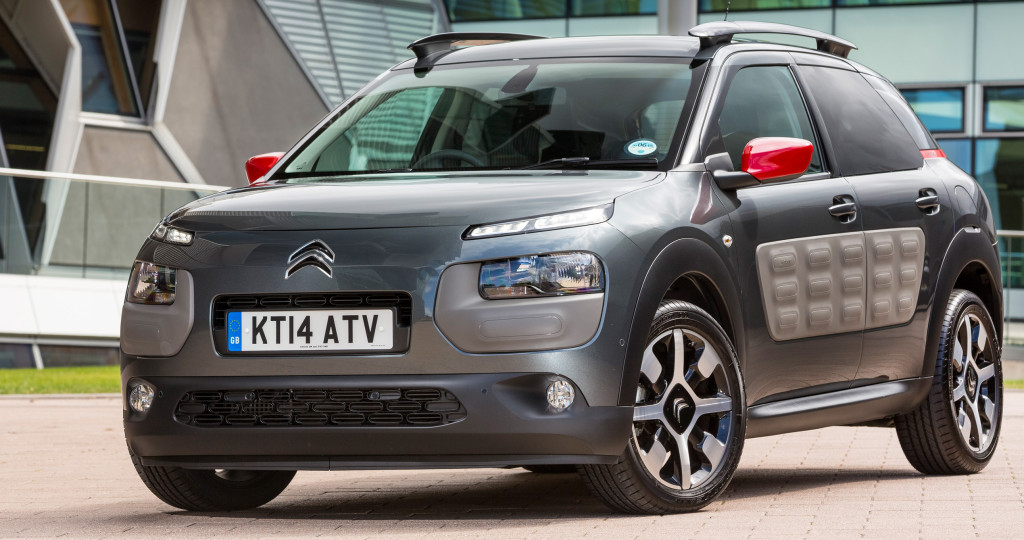 It’s a car that grew on me bit by bit the longer we had it. The shape is chunky and funky, its shark grey paintwork in district opposition to its stand–out cherry red door mirrors and red flashes on the rear pillars,which give the roof a bit of a floaty look.

It’s devoid of sharp edges and its smooth, rounded shape is a refreshing change to the sharp angles on so many cars these days.

The roof bars look strong and functional and there’s also a large panoramic roof to allow maximum light into the cabin.

The Airbump technology fitted to the sides and the bumper comes in a choice of four colours and provides day-to-day protection from those who can’t control their shopping trolleys, the supple thermoplastic polyurethane skins incorporating air capsules to absorb impacts. So hopefully lower repair bills, if any at all.

The proportions of the C4 Cactus give it a 2.6m wheelbase (equivalent to a Citroën C4) putting the emphasis on space. It has the dimensions of a compact hatchback (length: 4.16m, width: 1.73m) and shorter overhangs by placing the wheels in the four corners.

Inside they’ve de-cluttered the cabin to provide a friendlier, more relaxing environment. And here’s how they did it.

* ‘Airbag In Roof’ technology – transferring the passenger airbag to the roof and deploying it over the windscreen, rather than positioning it in the dashboard.
* Conventional control buttons replaced by a 7-inch touchscreen, grouping together all the main vehicle functions (including the air conditioning, media, navigation, vehicle settings, telephone, connectivity & driving aids)
* The traditional instrument cluster replaced by a digital screen – there’s no rev counter.
* And instead of conventional door handles, you pull them shut with what Citroen call ‘luggage inspired leather straps’.

In the rear, passenger legroom is similar to that of the C4 ie OK. At just 4.16m long it makes for easy driving and handling in the city –and there’s a decent boot capacity of 358-litres. 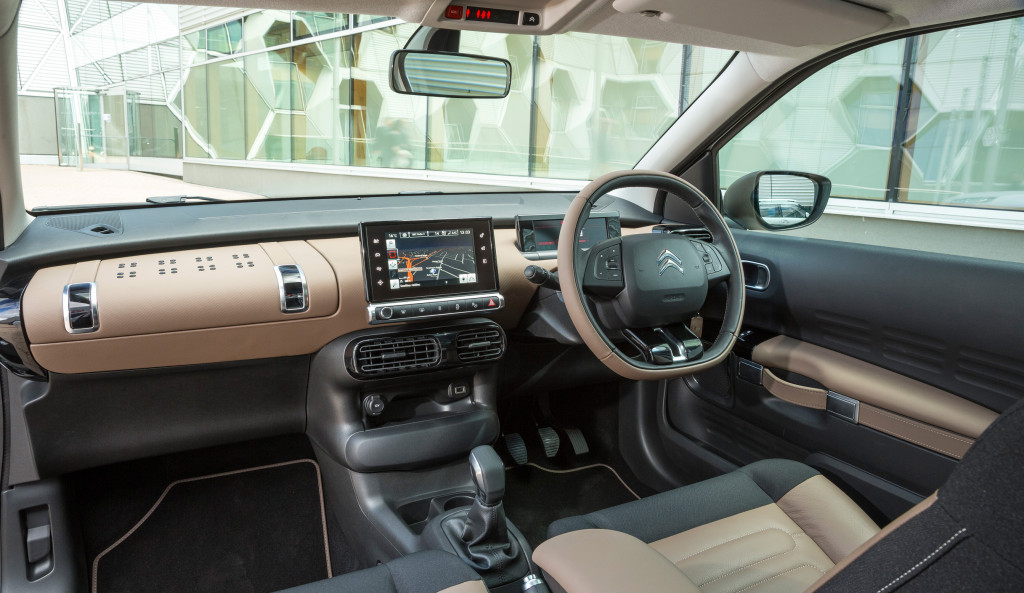 And here’s one small point to watch out for if you’re a size 10 or above (shoe size, not dress, Sybil) The trim on the lower dash area is just waiting to catch your feet as you move over the pedals which is both annoying and frustrating at the same time.

Sampled here is the 1.6 litre Euro 6 compliant turbocharged diesel, a very useful performer with 254Nm of useable torque, a clean CO2 figure of 89g/km and a claimed combined figure the good side of 80mpg.

If run of the mill doesn’t float your canoe but quirky does, give it the once over. 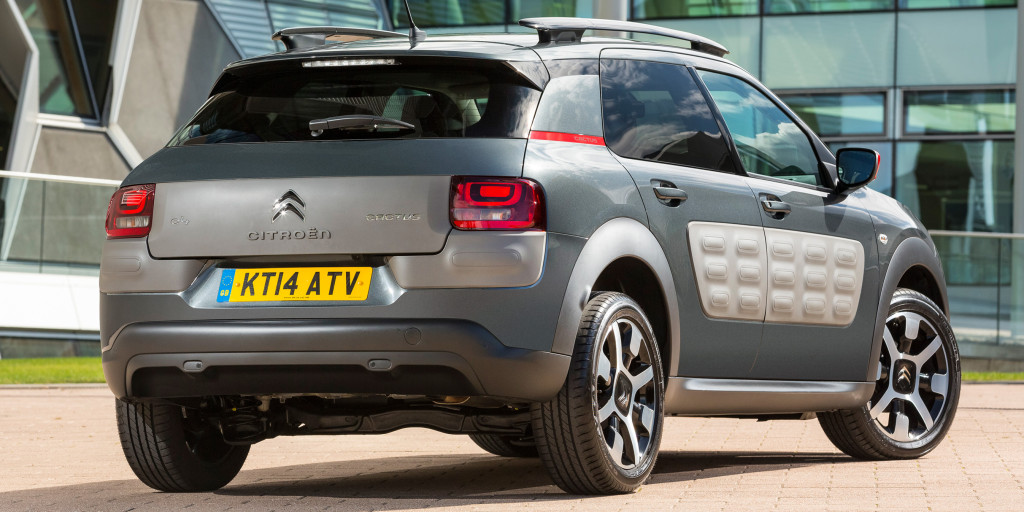