CONSIDER the fact that Audi’s new RS3 Sportback has an engine that is barely longer than your average loaf of bread and you might be left thinking that it’s a slice short of a full wholemeal.

But that’s about as far wide of the truth as a claim that the mice are jumping on the traps because mother-in-law is coming to stay.

The clue’s in the title. RS. Two letters that sum up the importance to Audi of having products that are the pinnacle of their product range.

So, far from being a measly half stale bap if we carry on the bread analogy, what we have here is a freshly baked and still warm ciabatta. Just begging to be sampled.

Which I’m afraid to say will leave anyone doing that wanting considerably more. The RS3 Sportback is a highly addictive blend of everyday five door compact practicaility with ‘light the blue touch paper and enjoy’ performance. 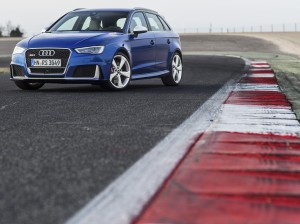 Lots of it. Here is a pleasing on the eye hatchback with its RS styling cues (bumpers, enlarged air inlets, flared arches, sill extensions, rear roof spoiler and twin oval exhausts) that will scorch past 62mph in just 4.3 seconds and on to a limited top speed of 155mph.

If you want more it can be de-restricted and romp on to 174mph. But probably only if your name is Herman and there’s a handy traffic-free autobahn at the end of your strasse.

Undoubted pace, poise and a distinct lack of any torque steer as you feed in its 367ps and ensuing 465Nm of torque establish it as the most powerful production five cylinder engine in Audi RS history – a lineage that goes back 21 years. 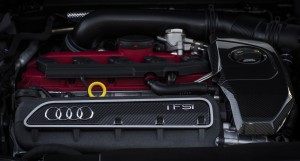 Audi’s technical wizards have instilled it with supercar performance, yet it can be sensible at times and return just under 35mpg on the combined cycle and its CO2 figure is a not too high 189g/km.

So, an everyday car if you like that will burble around before you unleash the 2.5 litre TFSI’s full potential, at which point the exhaust will spit and crackle and burble and let you know in no uncertain terms that this is a performance car with a capital P.

Put another way, supercar performance from a five door hatchback. In fact its sprintability (Audi word, not mine) is equal to and in some cases better than some supercars. That tells you just how good the five cylinder unit really is. 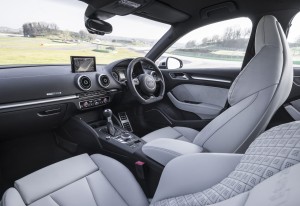 Its mid range performance is nothing short of spectacular, with its huge reserves of torque on tap from 1625 to 5550rpm. In fact everything has moved up a gear – the new seven speed S tronic twin clutch gearbox shifts faster than before, directing the grunt to the quattro permanent all heel drive system which is – yes you’ve guessed it – faster reacting than before.

And with less weight to push around than before – the RS3 is 55kgs lighter – the end result is perhaps predictable. Launch control ensures maximum acceleration from a standing start, with minimal wheelspin, which I can vouch for after a couple of hugely enjoyable runs up the Shelsley Walsh hill climb in Worcestershire, the oldest continually used motorsport venue in the world.

Prices start at £39,955, with first UK deliveries in July. Expect the usual high quality cabin with exceptional fit and finish and a pair of very supportive sports seats in fine Nappa leather.

And there are plenty of options available, some RS specific and others from the S3 like infortainment, Audi connect systems and assistance systems.

Our test car on the UK launch had an additional £11,000 worth fitted. Embellishments on top of a very fine car. 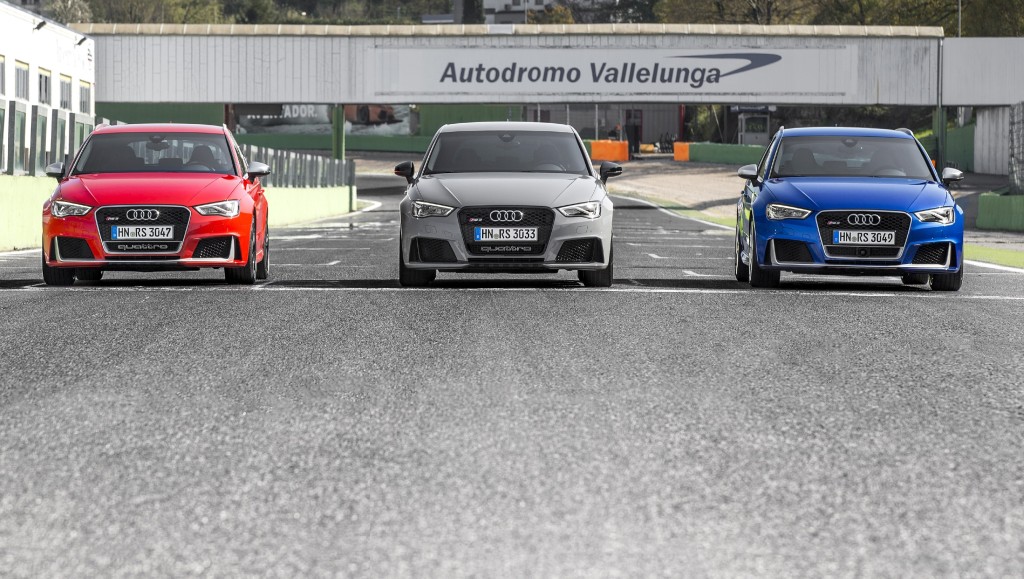