TAKE a look at the picture above, consider the overall size and dimensions of the car and then take a wild stab at the engine size. Two litre diesel? 1.6 diesel?

Wrong. Under the bonnet of one of the neatest machines to arrive on the drive in recent months is just 1198cc of propulsion. And despite the fact its also mated to an automatic gearbox, it works. And works well.

The motor industry is having a pretty good stab at proving size isn’t everything, and Peugeot’s 308 SW – sampled here in its new GT Line trim – makes a strong statement before the house as a car that’s got the lot. 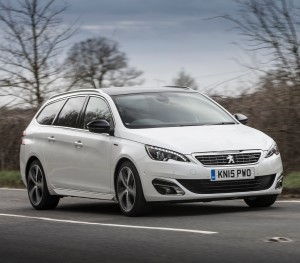 GT Line denotes it’s near the top of the range but Peugeot aficionados will be happy to note they’ve not tinkered overmuch with the smart exterior design, the i-Cockpit cabin, its very useable interior nor the quality feel you get as you slip behind the wheel.

And smart it is, a big step in the right direction compared to Peugeots of old where I can recall haphazard build quality and styling that just about ticked the ‘OK’ box.

This is a much better proposition to anyone in the market for a sassy looking estate packed with equipment and offering practicality, decent economy (more of this later) and a decent driving experience.

A quick walk round the outside will highlight the sleek shape and the 18 inch Diamant wheels, and the lacquered black diffuser and stylish twin tail pipes, and if the car in question is in Magnetic Blue as this one, then it’ll stand out even more.

And so to the petrol engine – all 1.2 litres of it and with just three cylinders to do the work. It’s a lusty little unit and refreshingly efficient at moving the SW around, and quite quickly when the need arises. Its 230Nm of torque gives it enough grunt to accelerate past traffic when required, and it’ll hit 62mph in just over 11 seconds, which is more than adequate in my book. 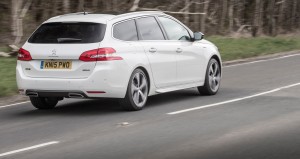 I’m not so convinced about the economy side of the equation though, as Peugeot claim a combined 54.3 whereas I never saw better than a figure some 22mpg LESS than that – and that included a very leisurely Sunday country drive.

A tad disappointing, but happy to report that the six speed automatic gearbox works well, with fairly seamless shifting adding to the overall good ride quality that the SW offers.

The driving position is good – there’s plenty of interior space in the cabin – and you’re always well located and comfortable in the half-Alcantara trimmed sports seats. 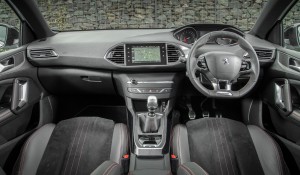 Ahead of you is that neat little steering wheel, with the main instruments located above its top edge so they’re always in sight. The centrally located main screen mops up most of the functions, and helps keep the dash area clear and tidy, but for me there’s one big fault with this.

Each time you want to alter the temperature of the cabin or the fan speed, you have to tap into the control location on the screen to do it, rather than merely adjust a handily located dial or rotary switch on the dash. It’s all very 21st century, but it means your concentration is momentarily on something other than the road ahead, and that can’t be good.

Extras to consider on top of an already high spec which includes rear view camera and park sensors – the panoramic glass roof at £500 which lets light flood into the cabin (clouds permitting) and that metallic blue paint (£525).