IT’S been a struggle – a struggle going on for some three decades – but it looks like Jaguar might at last have come up with something capable of taking on the seried ranks of Johnny Boch.

But now they’ve got a bit of opposition from a car built here in the UK and spouting Land of Hope and Glory from its shiny exhaust pipes.

Now, when they look in their mirrors, they’re going to see the proud and distinctive front end of the new Jaguar XE coming up behind to join in the race.

The giveaway is the trademark grille with the Jaguar’s head leering at you as you dare impede its progress. All mesh and chrome and headlights.

Progress that is, even in this 2.0 diesel engined model, reasonably swift.

There are some who would mischieviously liken it to a bloated Mondeo, probably because of Jaguar’s latter-day links to the Ford empire and the fact that, from the back, it can to some eyes bear a passing resemblance to the staple diet of the motorway rep.

In profile though it almost has the looks of a coupe, a very neat coupe, but of course it’s not. And there aren’t many coupes I can think of that will carry five adults in leather cosseted luxury. 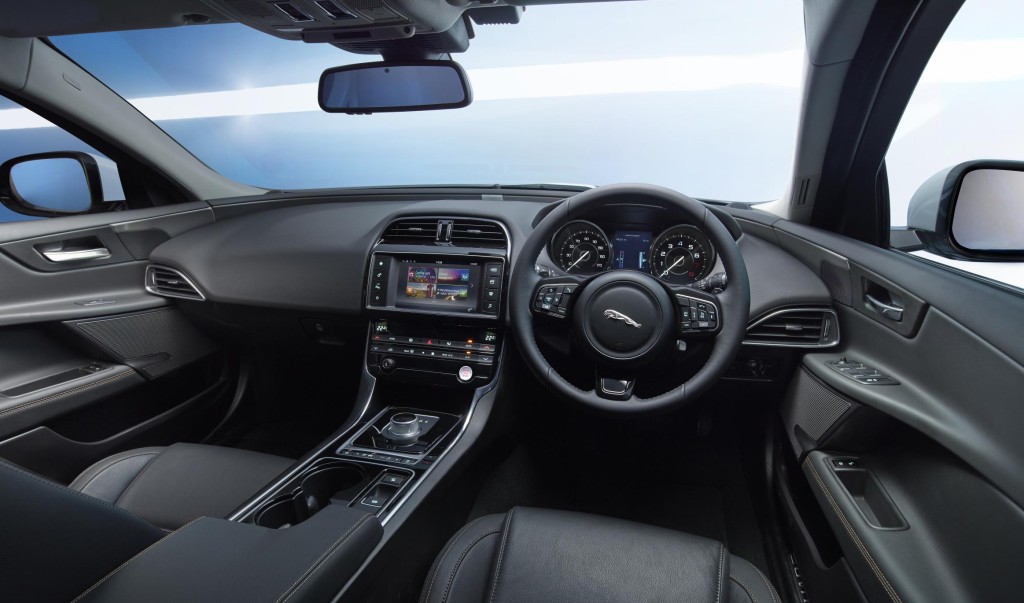 One of the best features for me is the superb driving position. Knowing how many packaging hurdles designers have to negotiate, I can hardly believe how tailored it is: perfect seat shape and position, ideal control layout and instrument view.

The body shell is stiff, the engine operates smoothly enough and what they call acoustic management (sound deadening to you and me) is exceptional.

There’s not even a handbrake to clutter it up either – that’s electronic and operated by a switch.

I love the way the dash cuts into the doors, so the air from the side vents sweeps round and into the cabin. The interior exudes class, and they used to say you can’t buy that. Well let me tell you you can. And it’ll cost you £32,325.

To an extent, we’ve been down this road before, with the X-Type, which had similar hopes pinned on it for sales success. But that didn’t work because in essence it was a Mondeo with a different coat which quickly went out of fashion.

The XE has a lot more going for it. It handles really well, darting in to bends and staying flat and composed through all manner of twists and turns. It also grips well, and the steering has a sharp and precise feel.

Rear-seat space isn’t really that generous, and you won’t be bragging in the local about the performance of the 161bhp diesel engine, although there are other units available. R-Sport versions like the one sampled here have what I’d sum up as a fairly firm ride.

The boot looks a decent size, and actually is, but the bootlid isn’t that big because of the downward sweep of the rear window, so loading it up requires some precision.
In years to come no one is going to go all dewey eyed and recall their time behind the wheel of an XE – that’s what the F Type is for at the end of the day.

But it could be remembered as the car that finally proved the Brits could hold their own in the premium sector.