TO SAY Audi’s A4 been part of a German blitzkrieg of the UK premium sector would be something of an under-statement.

The big three Hermanns (Audi/BMW/Mercedes Benz) account for a whoppingly large portion of the classy sector of the market, so when one makes a move the others take note.

And rightly so because the all new A4 – with its focus set on comfort and technology in equal measure – is a car to seriously consider if you’re in the £30,000 plus buying bracket.

And where this new model really blows up the lederhosen of the opposition is in the way it now drives. Yes, it’s a bit softer and a bit more comfortable but it now also gives you something back. A big smile on your face because it’s such an easy car to live with.

Now, for a biggish saloon it has quite a low, sleek profile, erring on the conservative side – so much so that getting in is almost a step down (because the seats are now mounted lower) but it’s well worth it once you’re in.

The A4 is impeccably well built – just look at the quality of the paintwork, even in areas that you don’t normally see, and the sheer quality of the interior. Switches that operate with a reassuring click, high grade plastics and fabrics. A true premium built car brimming with the latest technology.

The A4 moniker was first used in 1995 (before that it was the Audi 80 for all you historians) and if you look back at the interior of that car and compare it with the latest it’s mind bogglingly impressive how far they – and indeed we in general – have come in just 20 years.

There is now an enormous mount of information at your fingertips, via the centrally mounted 8.3 inch touchscreen, the Virtual Cockpit option and its user friendly 12.3 inch hi-res display and via the many buttons on the flat bottomed steering wheel.

The Virtual Cockpit is a configurable display and can be tailored to your liking, showing you a hi-res navigation map, vehicle details such as speed and oil temperature or even the infotainment menu. Buttons on the steering wheel allow the driver to cycle through the various displays offered.
Buyers can also opt for LTE mobile connectivity, which will turn their cars into a wi-fi hotspot. 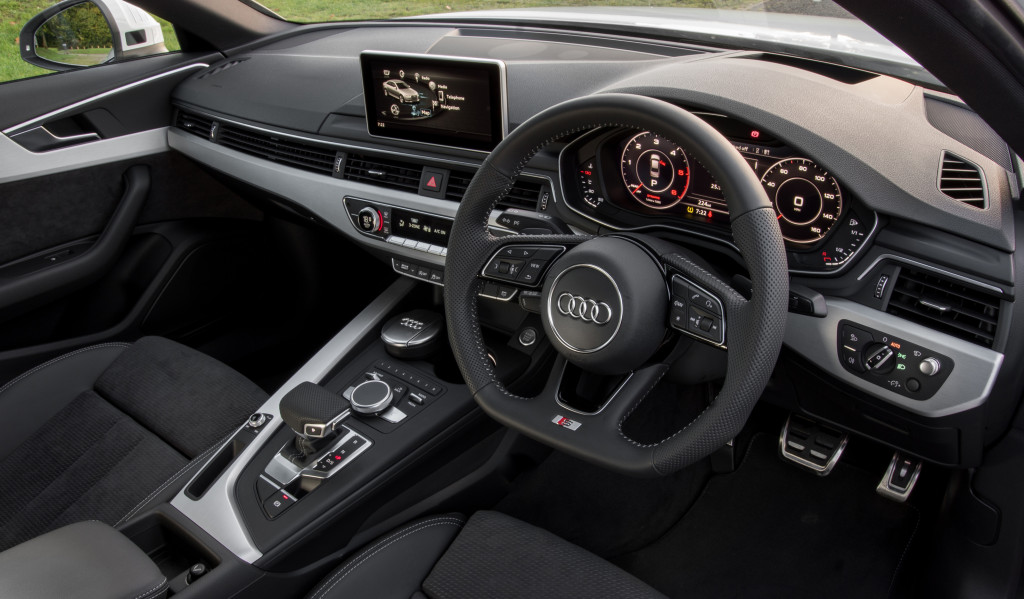 I’ve been critical in the past of the way Mercedes plonked their info screen in their cars almost as an afterthought, but in the Audi it just looks like it’s meant to be there – a by-product of the almost ruthless desire to be the best, and one which supports Apple CarPlay and Android Auto to boot.

There’s a distinct prestige feel about the whole package, and a lot of neat little subtle touches, like the bright puddle lights on all the door handles, the way the kick plates illuminate when you open the door, the unobtrusive head up speed display and the start up sequence in this 2.0 TDi S line S tronic. Settle behind the wheel, press the start button, select one of the drive settings via the aircraft-style gear lever, click off the handbrake and away. No fumbling around, just a succession of clicks. So relaxing and with a smoothness and fluidity that is appreciated by the driver. 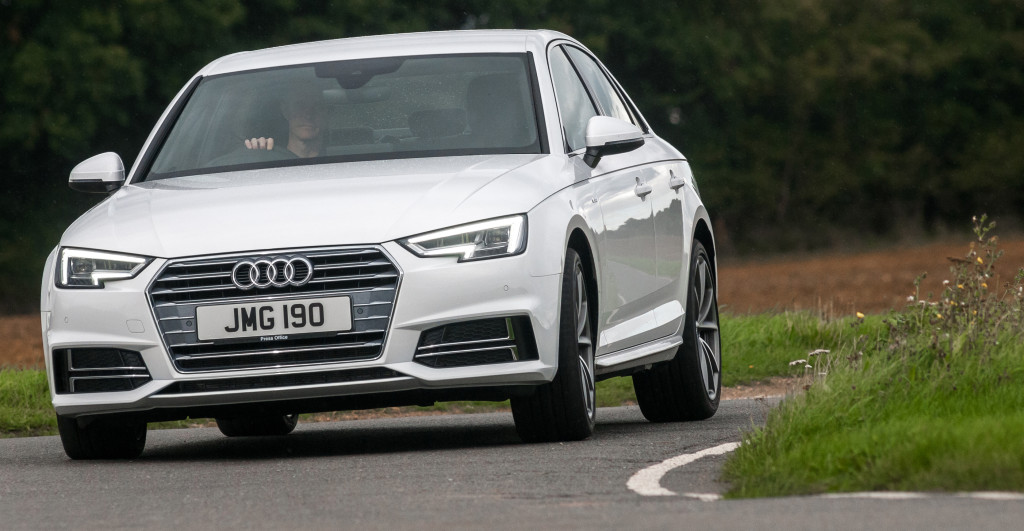 Out on the Queen’s highway, the 190ps diesel proves a willing worker, sitting in the Volkswagen Group’s MLB Evo platform which has helped to reduce the overall weight by some 120kgs over the previous model and make the A4 both longer and wider. But that also means there’s more room inside for the occupants.

It feels well connected to the road, with steering that is so precise and light yet still manages to convey decent feedback about what the front wheels are up to.

And all the exterior work has helped to make noise in the cabin almost a thing of the past. Accelerate hard and there’s not a lot of wind or engine noise to note, accentuating the prestige feel of the A4.
And there are plenty engines to choose from in the latest range from a 1.4 TFSI to a 3.0 TDI.
A4 has been a huge success story for the Milton Keynes based importer over the years. This is the latest chapter.