THEY might not be setting the F1 grids alight at the moment but Infiniti are aiming to move higher up the sales charts with their road cars.

Enter the Q30, their move into a more compact sector of the market from the bigger beasties they’ve been offering us thus far.

And it’s certainly a refreshing change from our normal fare, a car with a distinctive look that’s been breathed heavily on by someone who knows a thing or two about style.

Because it’s got loads of it in the shape of its curvy exterior and smart cabin. It still bears the Infiniti hallmarks of that bowed front grille and swept back headlights but there are now curves and sweeps that are all the more evident from behind the wheel and when viewed in the door mirror. 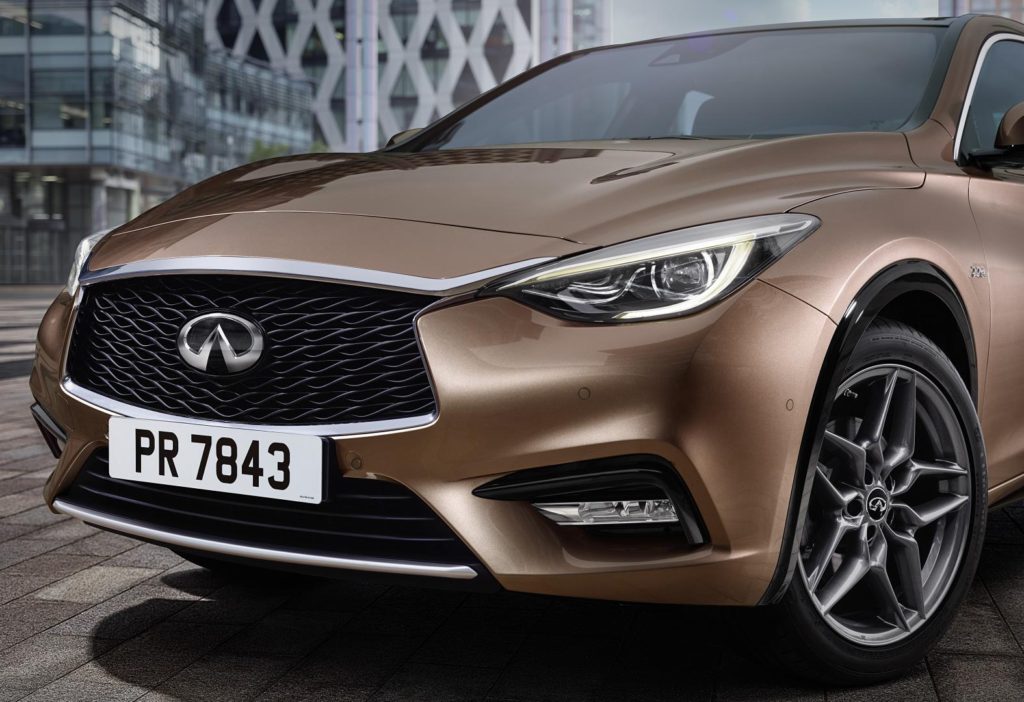 Launched in the US in 1989, Infiniti’s reason for existence as a subsidiary of Nissan was to make luxury biased cars with a premium pricetag.

UK sales have been a bit of a challenge since they arrived here in 2008. The Q30 therefore is not a budget buy but it seems to be a genuine alternative to some of the offerings from our Common Market cousins.

Parts have been shared with other Nissan models, as well as their Alliance partners Renault and Mercedes, and Q30 – built up in Sunderland – actually rides on the platform from the A Class Merc. As is the 1.5 diesel engine in Sport manual version tested here – expected to be the most popular choice among buyers with its 109ps, 260Nm and 12 second 0-62mph time. It’s no fireball but it’s adequate enough for most purposes and its mid range performance is good, once you’ve got past the first couple of gears. 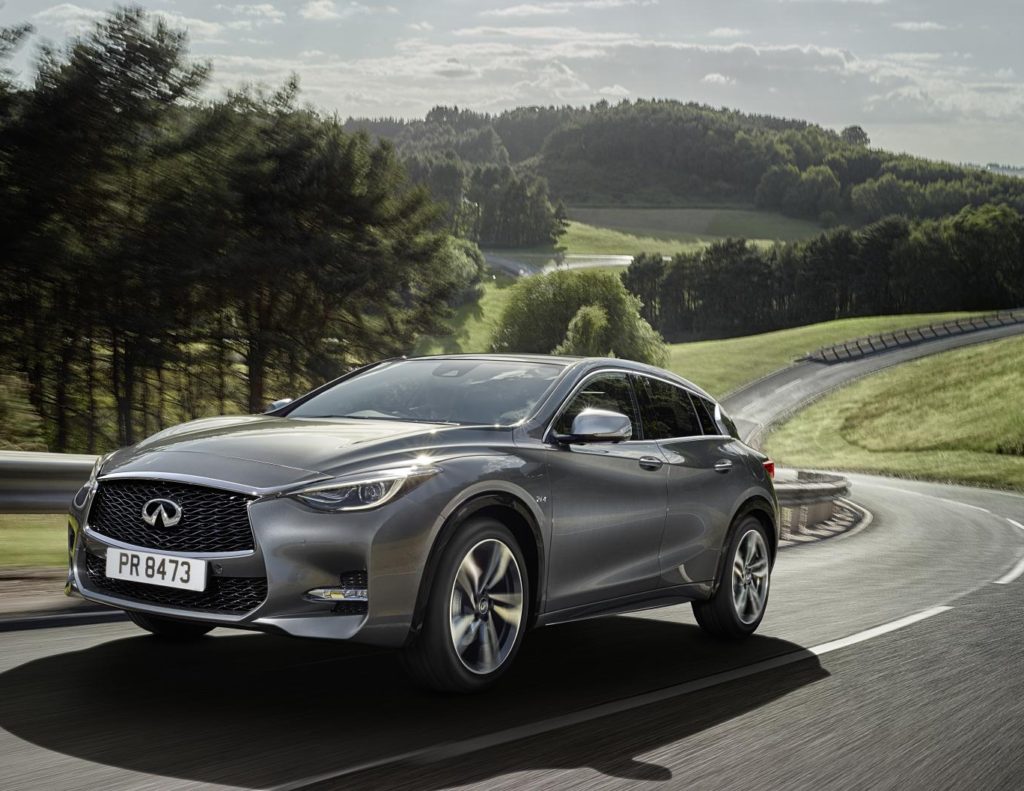 It’s only available with five doors but space isn’t over generous. It’s a premium accented car and head and legroom in the back is at a premium, though those in front won’t find it in any way cramped. My only niggle here was the cramped footwell, where the intruding wheel arch meant the brake and accelerator pedals felt close together. The driving position is slightly higher than in other hatchbacks, and that tends to make you more aware of the dark headlining that makes the cabin a touch sombre.

There are two body styles, the standard Q30 and the pumped up Sport, which sits a bit lower, has bigger wheels, different bumpers and sportier seats. Its prime USP (unique selling point) is probably its comfort – you could do a lot of miles without starting to squirm behind the wheel. 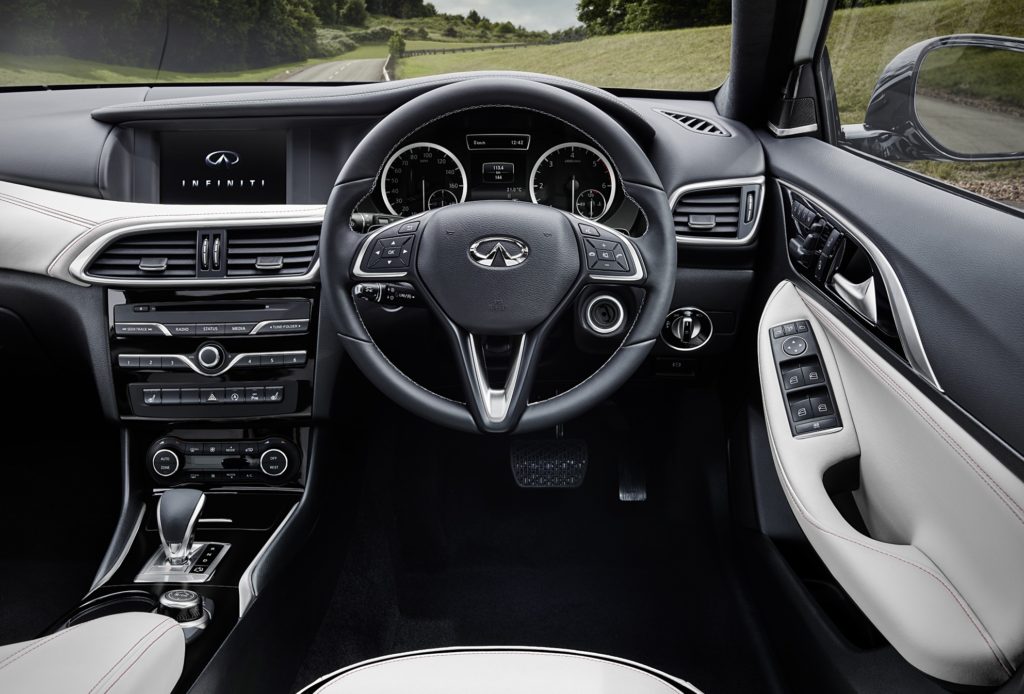 Purple is Infiniti’s colour, as Formula One fans will recall from their former tie up with Red Bull Racing and that’s why you’ll find it subtley used on the alloy wheels, and in the stitching of the interior leather.

The accent is very much on comfort inside and the finish is good. Not so the quality control, as there were distinct rattles from the door frames on both sides at the front, cured by opening the window a touch.

There are four engines to pick from – 1.5 and 2.2 diesels, and 1.6 and 2.0 petrol units, and on the smaller engines you can have either a six speed manual or seven speed auto, but the manual is not a smooth an operator as you might expect from the premium pricetag. 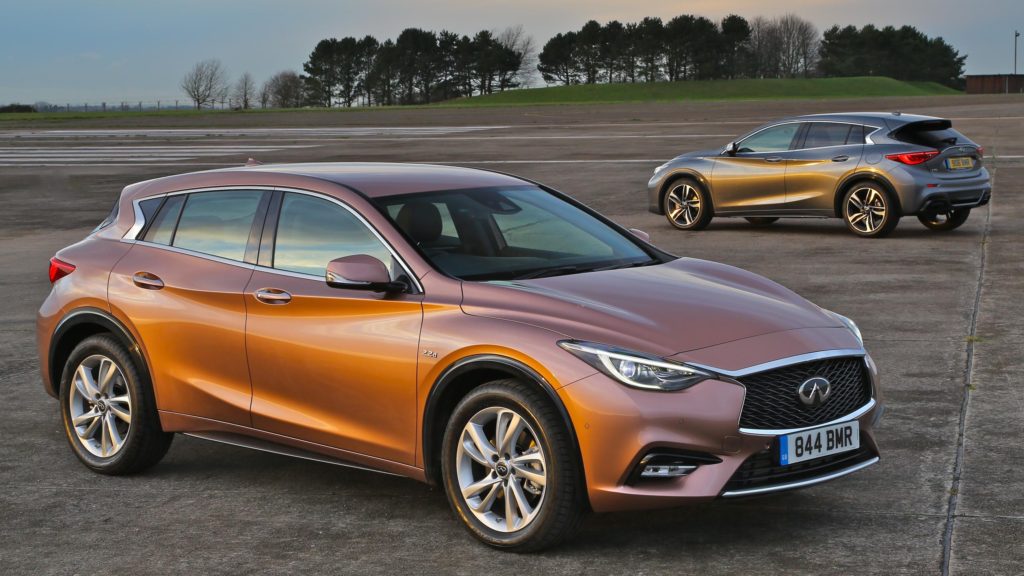