THE Golf was credited with being the first hot hatchback but you motoring historians out there will know that is not strictly the case.

That mantle falls to the Renault 5 Gordini, the company’s first ever front wheel drive sports hatchback and one that terrorised grannies a full year before the Golf was launched in 1977.

And that mainstay of ‘fast and furious for everyone’ has served the French manufacturer well over the ensuing three decades and more.

We might not like the French from a Euro standpoint, but we sure do love their cars, for here in the UK we’re mugs for fast Renaults, buying more Renaultsport models than they buy themselves.

The latest incarnation of the popular Megane majors on that. There are lesser versions depending on your need or budget – the range kicks off at £16,950 – and then there’s the all-new Megane GT Nav. All £25,500 of it.

Every version of the Megane has had its own particular idiosyncrasies and styling touches and they’ve all succeeded in moving the game on. This is far and away the best yet to my mind.

Its stunning looks are a vast improvement over the outgoing Megane. It oozes French style and on the face of it the build quality is good too – not an accusation you could level at some offering from the wrong side of the channel.

You get a really smart hi tech cabin with a big 8.7 inch portrait central screen that looks like you’ve stuck your own motoring iPad in the centre of the dash.

Renaultsport badging is very much in evidence – on this model it doesn’t actually say it’s a Megane other than on the carpet mat.

The 1.6 202bhp turbo is exclusive to the GT and it comes with a dual clutch seven speed auto box as standard.

Bucket seats that are firm and fairly unforgiving yet still oddly comfortable lock you in behind a leather trimmed steering wheel. They’re stylish and comfortable, and keep you well located even if they are a bit gaudy with their bright blue and grey alcantara finish.

The door caps have blue inserts and if you’re really in a blue mood, you can dial up blue as the ambient lighting in the doors. Other colours are available too and the GT comes with a lot of standard kit – rear camera, front and rear park sensors, traffic sign recognition, automatic high/low beam and the usual gamut of safety systems although I’m a bit non commital about the four wheel steering technology it employs. It doesn’t really feel any more pin sharp than the best of the rest and you don’t feel any ‘eureka’ moment from behind the wheel.

It’ll even give you, in split seconds, the imminent arrival time of your front bumper into the rear of the car in front if you’re not fully paying attention.

Being an auto you’ll be stepping on the brake pedal a bit more than normal to get the pads biting on the discs and reining in the 202 horses powering away under the bonnet. Under strong acceleration there a noticeable parp from the exhaust as it slips through the gears which adds to the sporty ambiance of the GT.

At low speed in crawling traffic it does however have a tendency to lurch a bit which might not appeal to all.

Its sharp lines are highlights of the body’s shape as are its distinctive daytime running lights, and it’s altogether a more desirable looking car than maybe has been the case in the past.

There’s a good sized boot and reasonable passenger space but beware if you’re sitting behind a tall driver when the rear legroom will be limited.

With a car like this there’s always that underlying trend to switch to hooligan mode, and the Renault is perfectly capable of enticing you to do just that. 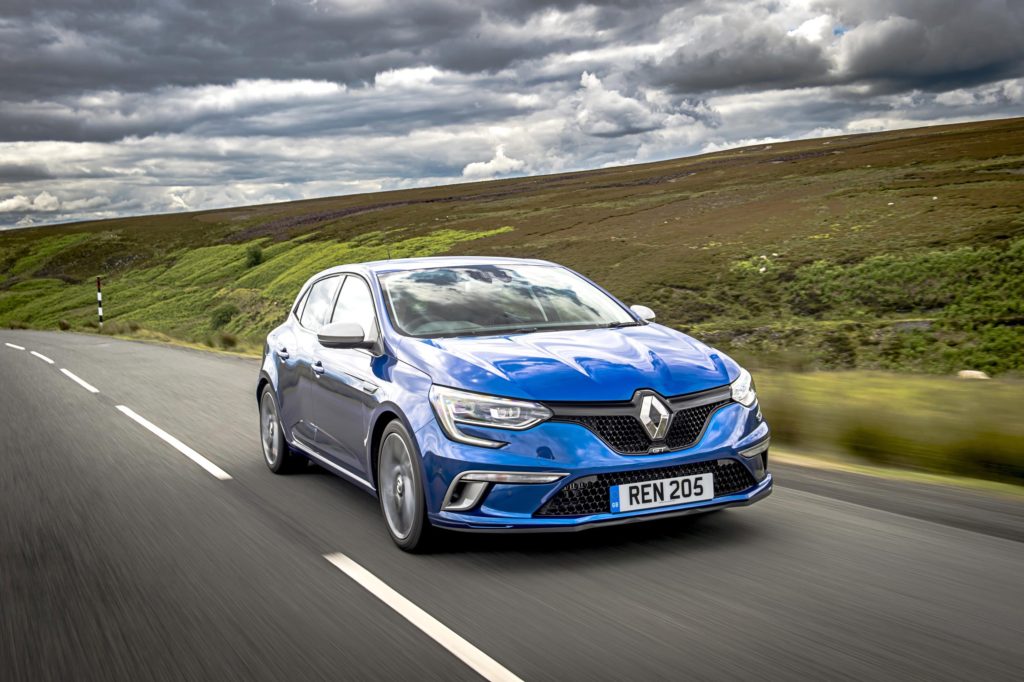