THE New Zealander who gave McLaren its name will always be remembered as the ‘whoosh, bonk’ man.

That was the way he went about things in his early years. “We can get a body knocked up and whoosh, bonk, there’s our racer’ was the Bruce McLaren way of doing things in the 1960s.

These days, at McLaren’s pristine factory in Woking, you get the distinct impression that things are a touch more ordered, more clinical, ever so slghtly better organised.

The race team has been winning since it was formed in 1963, but it took them til 1992 to produce their first road car, the legendary three seater F1. 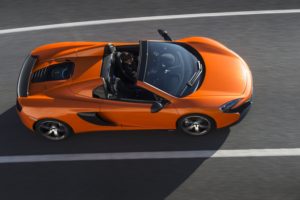 McLaren Automotive was only born in 2010. Ownership of one these days starts at £128,000 and it’s still an exclusive club. Even with a sales plan stretching to 2022 they don’t expect to be hand building any more than 5,000 cars a year at the technical centre – and that’s worldwide sales. 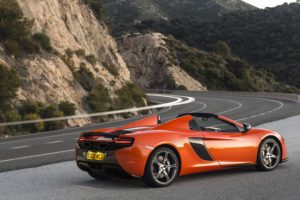 And by that time they predict 50 per cent of their cars will be hybridised models.

All the more reason, then, to luxuriate in the current Super Series range where you’ll find the 650S Spider with its super lightweight carbon fibre monocell body structure and V8 twin turbo rear wheel drive powertrain. A drivers dream and a four wheeled showcase for McLaren’s obsession with technical excellence.. 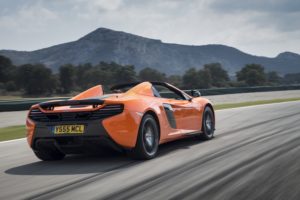 So, unleash the £218,000 Spider, but there’s one initial hurdle to get over before you can enjoy this 650ps 204mph offering from the burgeoning McLaren stable. And that’s getting into the damn thing.

Ladies, be warned, there is absolutely no elegant way of doing it, due to the up and forward hinging door that hangs ominously over your head. It’s bum first, legs later as you arrange yourself in the snug seat and gaze out at the bonnet that drops away in front of you, leaving your locating points as the two large wheel arches. It’s like taking the wheel of a race car, which of course the 650 is in various different guises in race series across the globe.

You’ll immediately be wowed by the quality of the standard fit alcantara clad interior and the great driving position that gives you plenty legroom.

The performance is highly addictive, particularly in the Spider where you can lower the small window between you and the 650ps engine behind your head and listen as it draws breath between bursts of intoxicating latent power.

Yet should you wish, you can mix in with the surrounding traffic – not unobtrusively it has to be said, with this one’s bright orange paintwork that pays homage to McLaren’s racing origins – and burble around town with the Spider showing no signs of dissent.

It’s in its element out on the open road, but it’s equally happy to do your bidding whatever the conditions.

Its predictability depends very much on how you drive it, and with all that explosive power surging out through the contact the rear tyres have with the black stuff, you can make it step out of line. 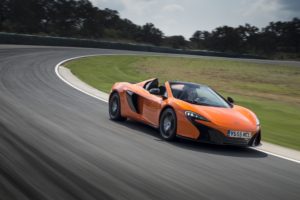 The gearbox will serve up lighting quick shifts and while there are three different drive modes – Normal, Sport and Track – the Spider displays a super smooth ride quality that’s exceptional in a car with this ballistic performance potential.

It weighs a remarkably svelte 1330kgs, so head for a track day to fully exploit it – public roads are not the place to try and emulate our Jenson.

It’s a car for people who have a true love of the things, the ultimate keyring for the ultimate petrolhead. It’s explosively rapid, true, but it also has the ability to stop, steer and do all the rest of the necessary stuff with a very high degree of competence too. 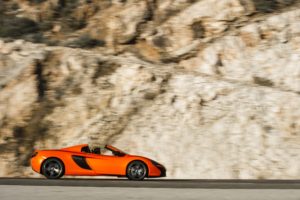 So, a driving experience par excellence. Some said the 12C – the car the 650S evolved from – was too ordinary for a supercar. They’re not saying the same about this though.