THERE’S still something about the noise the engine in the back of a Porsche makes that gets right through to your soul – despite the meddling of the EU.

Even when it’s a slightly more modest than usual two litre turbocharged unit in the back of the latest 718 Boxster as opposed to the traditional six cylinder unit of old.

It’s a car which makes you want to switch off the radio because nothing that comes out of the mouth of those broadcasting can compete with the subliminal sounds that herald spent gases shooting out of the tail pipes.

718 is a reference to the 1957 718 RSK that was one of their most successful racers, but even though much of Porsche’s folklore has been built around their six cylinder engines, there are more than enough people around eager to get their hands on a pukka Porsche for something like half the asking price of a 911.

This very stylish drop dead gorgeous open top sports car has the DNA and heritage that goes all the way back to the legendary 356 Porsche.

It gulps air in to the mid mounted engine though its big side mounted air intakes to help cool the 300hp engine – a lot of horses for something that weighs just 1365kgs.

There’s a distinct lack of superfluous buttons on the steering wheel in the compact, neat and tidy cabin. It just does what it’s put there to do – give you pin sharp responses – and keep the front wheels pointing in some semblance of the direction you’ve chosen.

The gear shift paddles are there to connect you to the seven speed automatic box but that’s it – no concession to today’s fad of turning the wheel into a big boy’s play station control.

It has a Kimi Raikkonen-esque ability to tell you ‘I know what I’m doing’ and there’s enough electronic wizardry tucked away in the dark corners to give the driver a little boost of confidence.

Roof down on the neat two seater is not much of an option in November when the £284 option of heated seats is a worthwhile investment to negate Jack Frost’s first call of the winter. 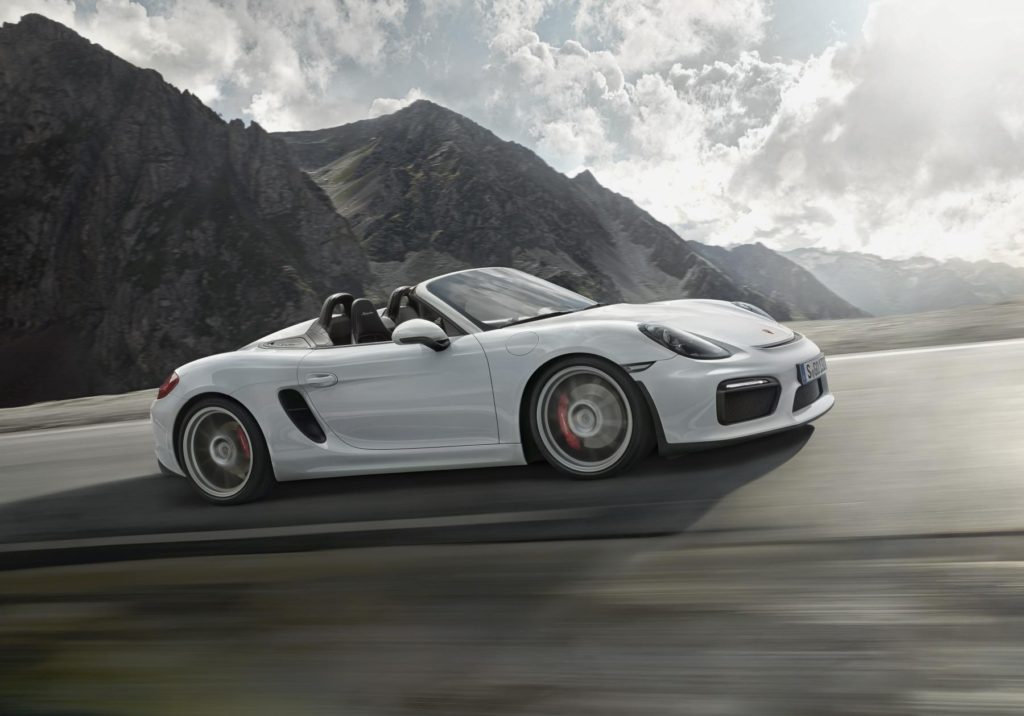 The restyled Boxster is a car that attracted more than the usual amount of admiring comments, in part sparked by the black paintwork and Bordeaux red rag top, the latter colour used creatively inside to add a definite touch of style. Red leather atop the instrument cluster is evident from the outside, as are the door grabs and seat trimming.

It’s kind of surreal to have a car with a 170mph potential and a 0-62 time of under five seconds suddenly switch itself off when you come to a halt in traffic. Yes, stop/go, in the name of economy and emissions, has reached the echelons of high performance motoring.

You could amble round in this all day long if needed. It has a level of comfort that defies its low slung looks, though there are buttons in the centre console that can help you unleash the beast when you feel the need for speed.

Motorsport fans constantly regaled with how tyre pressure affect performance can see for themselves just that, with a monitor on the dash showing how much your pressures rise as the tyres warm up after a cold start. Particularly noticeable on the rear pair here which are the driving wheels.

Evocative doesn’t do it justice.