THINK long and hard if you’re in the market for VW’s latest Passat – you’re going to need a long garage or plenty space on your drive. Or both.

And a spare socket won’t go amiss, as the new GTE is a plug-in hybrid that can be driven for up to 31 miles on electric power alone in E-mode. But probably only if you have a right foot that is as light of touch as a butterfly.

That rules my size 10s out, and after a full charge the night before, I managed to wipe off seven miles from the range in the space of just three on the road taking grandson to his rugby practice. It was the same on the return trip, so obviously it’s me that needs the practice.

Good to know then that the big, roomy, comfortable Passat also comes equipped with a 1.4 TSI turbocharged petrol engine delivering 156ps and instilling it with a multi mile range when the electric batteries go flat.

Here’s the science. Under normal circumstances, the GTE starts in E-mode (pure electric). Once minimum battery charge is reached, Hybrid mode takes over which charges the battery under deceleration and automatically uses the TSI unit and/or the electric motor depending on the need.

You can always see which mode is active on the big display screen in the centre of the dash, which also houses the sat nav and other functions.

The lithium ion battery is fitted in the vehicle floor near the rear seat bench, its 125kg weight nicely spread out and helping with the balance and handling of the Passat, which for a long wheelbase car is more than acceptable.

It certainly doesn’t upset the comfort of those inside, and from a standard UK domestic outlet can be charged in a touch over four hours. From a wall box with a 3.6kW supply that comes down to two and a half hours. 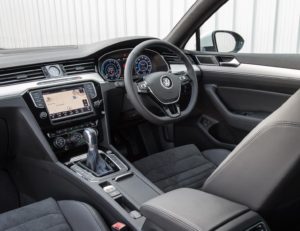 It’s a car that obviously demands a different approach to driving if you’re going to shell out the initial £36,525 and then use it to the best of its ability which includes hitting a claimed 166mpg. Best of luck with that.

You get instantaneous acceleration with electric power and of course it’s whisper quiet but hands up who’d like to see a much bigger battery range? When it runs out you end up revelling in the ability of a 1.4 litre engine making a pretty big car romp along with indecent haste.

Or, to get the best out of the potential 664 mile range you can charge the battery as you go along – an easy enough process accomplished by a touch on the main screen – but while lifting off in a normal car barely hinders forward progress it’s evident the GTE is braking itself and regenerating the battery as you ease off the throttle.

Passat has always been a popular member of the VW family. Probably because VW have always concentrated on its core values of quality, comfort and refinement.
There’s a degree of elegance to certain angled views of the German saloon. It manages to meld together a bit of panache, a bit of style (note the distinctive and almost coupe like profile) and a lot of practicality.

User friendly is its byword, and as well as that commodious cabin for passengers to stretch out in, there is a huge boot to swallow up your cases and bags.

The doors open big and wide, so big and wide people can easily get in and out of the cabin. It’s a car that has what every driver wants – a truly great driving position in a machine that works incredibly efficiently, from the way it holds on to the road to the almost fingertip lightness of the main controls.

Blue highlighting signifies VW’s hybrid offerings and its very much in evidence here in the stitching, the main display and the ambient lighting set in the doors. Even the brake calipers are blue.

Hybrid is the way to go, undoubtedly.