IF we were handing out commendations, then the Suzuki SX4 S-Cross would be driving off stage with quite a few.

A car that effectively took the compact crossover battle head on with the then class leading Nissan Qashqai has had a major facelift – and it’s made it an altogether more purposeful looking piece of kit than before.

Suzuki have always been renowned for an unblemished ability to build good, workmanlike cars as well as decent motorbikes – but the arrival of the S-Cross in 2013 marked them out as a car maker capable of much more. 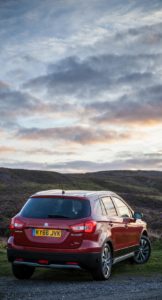 Suzuki is a company that has embraced the needs of the 21 century motoring public when it comes to all the things that tick our boxes – looks, practicality, equipment levels, space, performance and price.

The SX4 S-Cross has a more distinctive front end and headlight treatment than before which adds to its distinctive on road presence. It’s certainly more noticeable than before and now comes with slightly better ground clearance, which means for you and I getting in and out is easier. And there are a lot of people out there who appreciate that in a car.

When launched, S-Cross came with either 1.6 petrol or diesel, but now they have added the excellent Boosterjet engines in 1.0 and 1.4 form first used in the Vitara and Baleno to the package, and they really are cracking units. The one litre three cylinder sampled here is a cracking little engine and while its output at 111ps and 170Nm might seem on the face of it modest, bear in mind the car itself weighs just 1160kgs so performance is perfectly adequate. Effortless is the word.

There’s a purposeful thrum as it revs its little Hungarian nuts up the rev band as you push on, but at cruising speeds it settle down to be no more annoying than any other engine you might come across in a car of this ilk.

Its overall lightness gives it an agility than belies its chunky look and interior space on offer.

Vitally important to anyone parting with their hard earned for a car is how they settle behind the wheel, and the S-Cross is no letdown. There’s good head, leg and shoulder room and with a good range of adjustment to the seat and steering wheel the ideal position can be fairly easily found.

Handling, comfort and its overall behaviour on the road earn high marks – it drives really well – and the interior is neat and uncluttered, black the predominant colour with the edges of panels picked out with silver trim to brighten things up. It’s neat, workmanlike and uncluttered, yet still has a classy look to it.

The crossover sector of the European market is ‘Sales Central’ these days and one that Suzuki firmly has a foothold in.

The S-Cross was born out of a mix of their compact car expertise and their ability to build workmanlike sport utility vehicles. The result is a car with the best of most motoring worlds.