THE Lexus RC F has got more letters after its name than General Sir Anthony Cecil Hogmanay Melchett and has about the same level of sanity…..

And while there’s an eco light on the dashboard, and you can in fact select eco mode, something with a naturally aspirated five litre V8 engine shoehorned in under the bonnet is hardly going to be sipping its way through the tanker sized fuel tank. Not with a 4.5 second hurtle to 62mph and an electronically limited top speed of 168mph available to your right boot.

The ride in this RC F 5.0ILAuto ACC PCS TV Mark Levinson model (see what I mean about letters) is noticeably firm which might be seen as a black mark when there is a lot of other competition around from other coupes in the £60,000 bracket.

The suspension isn’t adjustable, so it’ll pitter-patter down the road on a surface that is anything short of decent, which leaves it to suffer at the vagaries of our ailing road network.

Other Lexus models focus on low running costs, but the RC F coupe is all about the thrill of driving and as a high-performance coupe, it’s designed to be a Harry Hooligan on the race track as well as the road, and that has resulted in that relatively firm suspension setup.

It’s also quite a heavy car, weighing in at 1765kgs, so getting it moving at low speed is akin to getting a tardy teenager out the front door and off to school – it’ll go, but a bit reluctantly. 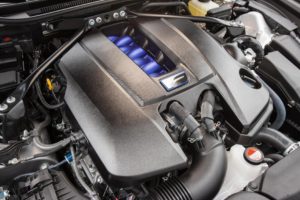 Stir things up though, and there’s no problem, very swift forward motion accompanied by the bellowing soundtrack of a V8 doing its thing.

It’s a striking car from all angles and its distinctive grille dominates the front of the car. Headlights add to the aggressive stance. Big vents to cool the discs and some sharp creases down the sides accentuate its sporting aspirations. Not a car then for a shy, retiring bank manager.

The racy theme continues in the cabin, with a pair of figure-hugging, high-backed seats, a chunky three-spoke steering wheel and TFT display for the driver. The seats and driving position are superb, and the quality of the materials gives it a real upmarket feel. 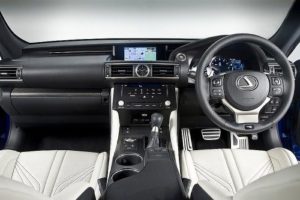 There’s a large central rev counter that changes its look depending on whether you’re in the Eco, Normal, Sport S or Sport+ driving mode.

It is a four seater, and access to the back two is ok but but they are only really for small children. The boot is a decent size for your luggage, as long as you’ve got long arms to reach to the back.

RC F is the third performance model from Lexus’ F Sport division, following the IS F saloon and the stunning and rather pricey LFA supercar.

It’s a car of fairly generous proportions but proximity sensors, a reversing camera and rear cross traffic alert system, which warns you of vehicles approaching from either side when you’re reversing, all help make parking easier – just make sure you leave space to open those wide doors.

FOR: Plenty of big engine GT appeal and stands out from the crowd
AGAINST: that firm ride