FOR a car so small, it’s perhaps surprising that Suzuki’s IGNIS is catching so many eyes.

It’s dimensions are so compact you could easily miss it in a queue of traffic – except for the fact that it has a highly distinctive look and cheeky appeal.

A scaled down Tonka toy off roader look in a car that will earn its crust plying the Queen’s highways and byeways with a full complement of adults and offspring aboard. 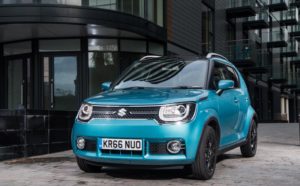 And it’s certainly caught the eye of the World Car of the Year judges, where it made it into the final three in the new Urban Car category.

To qualify for the initial judging process, vehicles had to be less than four metres long, suitable in design for everyday use in an urban environment and also on sale across two Continents by the deadline of Spring 2017. At 3.70 metres in length, the IGNIS Mini Crossover – which went on sale here in January and is already selling in significant numbers – qualified and was shortlisted earlier this year.

Its standout cheeky exterior design is easy for all to see, particularly its large prominent headlights that make it look like its got its bits caught in the fanbelt, yet despite its compact dimensions, its still manages to package enough interior space for four full-spec adults. 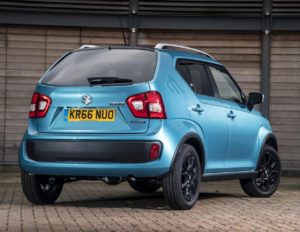 And its child-like footprint means you’re never going to be compromised by those who are seemingly unable to leave their cars lined up between two white lines in a car park. You can squeeze an IGNIS in anywhere and still be able to get in and out.

Part of Suzuki’s skill in making their smaller cars so efficient is by putting them on a strict diet – excess weight equals poorer performance in all the measures we adopt, so keeping the kerbweight here down to a supermodel level of just 810kgs means it performs well. What’s also evident though – and it’s something you can’t miss – is that by paring the weight down you don’t get that solid clunk when you shut the doors.

IGNIS is powered by a 90PS 1.2-litre Dualjet petrol engine and there’s also optional ALLGRIP four wheel drive.
If saving the planet is way up your tick list, then SHVS (Smart Hybrid Vehicle by Suzuki) technology that lowers CO2 emissions to 97g/km is available too.

On the road the little IGNIS zips along – there’s little weight to hold it back – and there are two things to note here. The brakes need a fairly firm, progressive stab to slow you down, and there’s a fair bit of body roll to contend with if your driving is of the spirited style. Nothing to worry about unduly, but it maybe lacks a measure of control that’s evident in other Suzuki offerings. 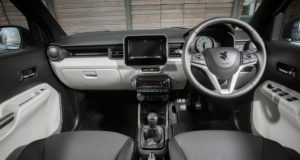 The SZ5 model offers the latest in safety technology with stereo cameras monitoring the distance between the vehicle and other objects.

And a special mention for its perceived economy. Suzuki quote an urban figure of 51.3 – I ended my spell with the computer showing 50.3.

FOR: less than 10 grand on the road, economical to run
AGAINST: not a lot, actually