AN SUV for the price of a supermini? Don’t mind if I do.

Dacia’s Duster is a small and tough SUV that costs about the same as a small hatchback, but offers a bit more space along with some Tonka toy looks.

It’s at the opposite end of the spectrum from the class leading SEAT Ateca and Nissan Qashqai, but offers pretty decent value for your money. 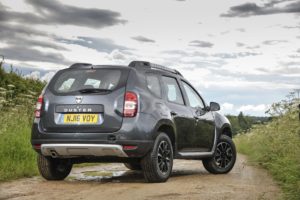 Opt for the entry level version at around nine and a half grand and you’ll need to be prepared to be confronted with a lot of plastic and not a lot in the way of standard kit. No radio, for example, but BMW didn’t offer them either years ago and it didn’t do them any harm.

We’ve been taking a look at the current Laureate spec dCi 1.5 (£14,995), which can now be specced with a twin clutch automatic gearbox that people are asking for more and more these days. A sensible option, considering the parlous state of our roads and the traffic crammed onto them.

And the great thing with an auto box is you can stick your left foot down the side of the transmission tunnel and forget about it until you need it again to get out of the car and stand up.

Laureate too is fairly basic and a bit plasticky inside but instrumentation is clear and dead ahead and there are few frills to distract you.

There’s minimal instrumentation – a speedo flanked by a rev counter on one side and basic info on the other. And that’s about it. 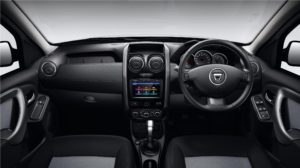 Looking for the radio controls? They’ve persevered with that quaint Renault tradition of sticking it behind one of the arms of the steering wheel, so you need to be familiar with how it operates.

It’s comfortable enough but the seat squabs are not very long and the option of a bit more legroom would be appreciated.

On the road it’s not that noisy for a diesel. Its steering is not exactly vague but it does lack a bit of precision and feel. Running gear is borrowed from Dacia’s collaboration with Renault and Nissan, which helps keep the cost down and provide a solid base to build on. 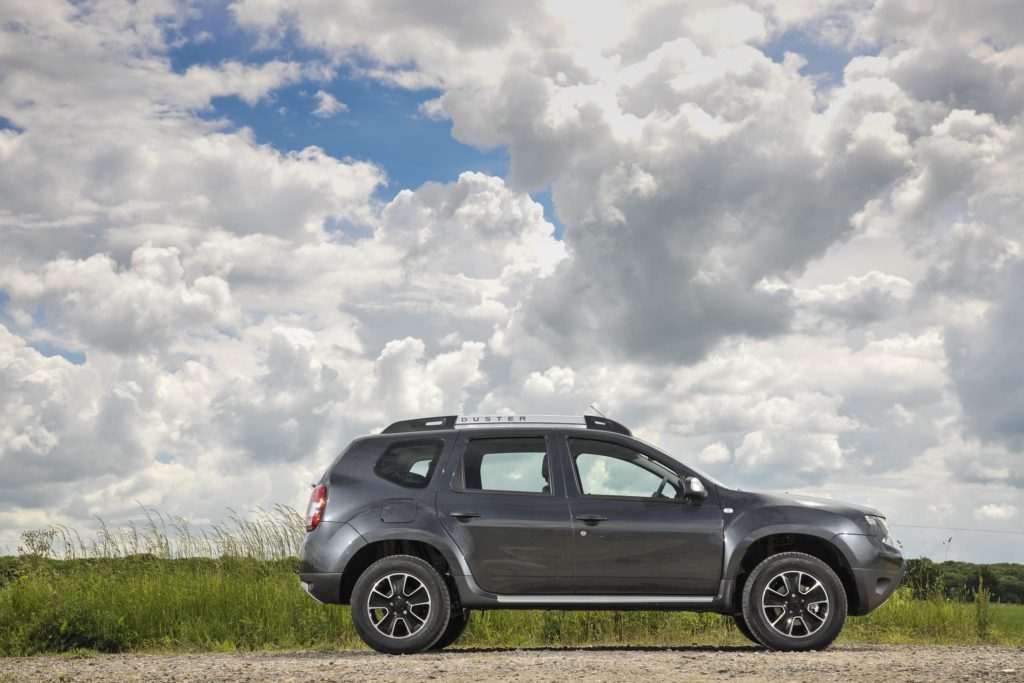 The Renault sourced 1.5 dci is a decent engine. It picks up well again when you have to lose speed for an errant elderly bimbler pulling out of a side road. It can sound a bit gruff but it’s got good low rev pull, so even with five aboard it shouldn’t struggle.

The steering wheel is limited in adjustment – just up and down – but it’s enough to make getting comfy behind the wheel not a problem.

Basic models only get steel wheels, but the Laureate runs on 16 inch alloys and adds a leather steering wheel, a trip computer, cruise control and manual air con.

Dacia wasn’t introduced in the UK as a Renault division until 2012. The Duster was the first car it sold here, and it set the template for the firm’s budget range.

Some will be left wondering if they actually need to spend a lot more money for a similar package…..

FOR: nothing can rival it for price.
AGAINST: badge snobs will hate it.