THE name smacks a bit of American – we used to call them estate cars here – but Fiat’s extended version of its neat new Tipo offers plenty of space for your bucks. Or euros. Or pounds.

The Tipo Station Wagon gives you a choice between the hatchback and a lot more space and hence increased practicality.

It helps that it’s a neat looking piece of equipment from the outside, having a distinct touch of Italian style about its lines and not merely being a hatchback with a box welded onto the rear. 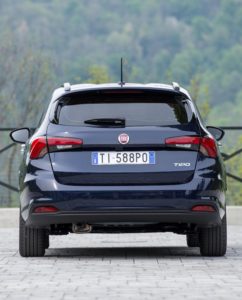 It’s lined up against a growing number of similar offerings from rival manufacturers and as such will have to work hard to attract sales against others that are perceived to offer more.

Tipo is not a budget offering – some have said the price is on the high side for a car that comes with something of a retro interior (for retro, read old fashioned, because there are wide expanses of bland plastic and little of the wow factor you might expect for the price.

But it’s all got a well-put-together feel to it, the dash layout is fairly simple with its small sat nav screen but it lacks the quirkiness and essence of Italy that’s evident in other Fiat cars. 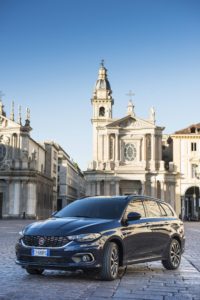 Our test car here weighs in at £19,345 in 1.6 MultiJet 120hp Lounge trim and standard equipment includes all round electric windows, DAB radio, Bluetooth and USB, roof bars and and a fair few buttons on the steering wheels for various controls.

When you weigh it all up, it’s the level of equipment at each trim level that gives the Tipo a bit of a leg up against the opposition.

On the practical side there’s 550 litres of space in the boot, which is a fair bit more than the hatchback and there’s a storage compartment beneath the floor to hide any valuables you might be transporting from prying eyes.
And with the rear seats folded down flat you can get a decent length load in the back – ideal for those trips to the DIY store and a normal car just won’t do the business.

And those who occupied the rear seats reported that headroom was good – the roofline doesn’t slope down as it does in the hatchback, and legroom was adequate too. 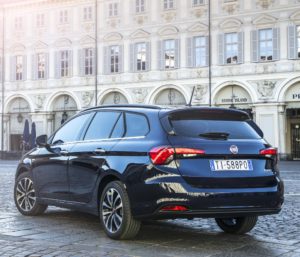 It doesn’t quite fill you with that sporty drive feeling you get in other Fiats. Behind the wheel it’s fine , the MultiJet engine being a responsive unit to your pedal inputs, but the steering maybe lacks a bit of sensitivity and the body can roll a bit if you’re a touch over enthusiastic.

The 1.6 proves quite spritely and willingly romps away from a standstill thanks to the 320Nm of torgue it develops. It stops safely when you hit the middle pedal and overall proves to be a decent enough car offering an acceptable level of comfort and refinement.

It does what it says on the tin and you can’t argue with that.

Nor can you knock it for its 98g/km emissions and 76.3mpg claimed combined economy. People may well buy it just for that.

FOR: economy, practicality
AGAINST: lacks a bit of sparkle