ISN’T it ‘Ioniq’ that now he’s got the big seat at the table, Trump is trying to take America backwards?

Of course, the rest of the world is moving in the opposite direction, thank goodness, and to that end we’re seeing a growing proliferation of hybrid cars that take an altogether different view of the climate/environment/planet/resources (delete as necessary).

So, in an Alannis Morrisette sort of way it is indeed ironic that the world’s leading superpower is harking back to a resource that has a dwindling popularity (unless you’re Chinese and building power stations like it’s going out of fashion). 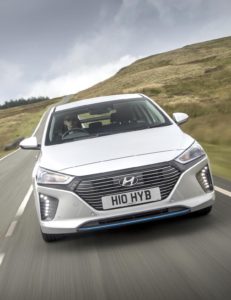 Hybrid motoring – and what that may spawn in the future – is a modern day fact of life, so cars like today’s subject, Hyundai’s Ioniq, are a definite vote winner for the motorist with an eye for what’s good for him or her, their family and the planet.

And with this car, you have a real choice, as it’s available in hybrid, plug-in or electric guises.
Sampled here is the hybrid Premium SE, a car that switches between electric and petrol power depending on how you’re doing your job piloting it.

In traffic and at low speed propulsion is pure electric, but when it needs a push the 1.6 litre petrol engine under the bonnet comes into play. The electric part of the equation is pretty instantaneous and when required the petrol engine gives you enough power to a) keep up with the traffic and b) zip past any weekend bimblers that are hogging the highway.

The relevant point about a hybrid is that because you can recharge the batteries as you go about your journey, you’re never going to suffer the range anxiety caused by a pure electric car, though things are improving in that area.

So, peace of mind to go about your business, knowing that in this instance the Ioniq is going to give you a healthy average of around 70mpg.

There’s a traditional look to the interior and the dash area. All the relevant information is there – whether you’re in eco mode, how much battery charge is left, that sort of thing – but Hyundai have resisted the temptation to go all 21st century with the layout.

The speedo ahead of you shows blue in normal motoring. Switch to Sport via the gearbox and the display takes on an orangey hue, with a digital speed readout in the centre of what is now a rev counter. But in the main the instrumentation is mainstream, with enough toys to keep you occupied.

Head, leg and shoulder room is decent and there adequate space in the back for passengers and in the big boot for the week’s shopping or luggage for a week away.

The firm and fairly flat seats are comfortable enough, and the handling and ride quality stands up to scrutiny even if the steering is a little anonymous. The precision is there, it just lacks a bit of feel.

And of course there are some neat touches to note, like the heated seats, a boon on cold mornings, which also have switches that cool them – great when you’re stuck in traffic on a hot day.

FOR: user friendly transport for the family
AGAINST: maybe TOO traditional