IT’S good to see a manufacturer cutting their cloth according to their cabriolet these days.

When others have taken the tin top route, there’s a definite tick in the ‘traditional’ box from Mercedes-Benz with smart fold down fabric roofs adorning their cabriolet models.

The latest to vie for your attention – and subsequent cash – is a rather fetching offering from the three pointed star stable in the shape of the C-Class Cabriolet.

Its distinctive silhouette is pretty unmistakable – and you wouldn’t mistake it for anything other than a Merc. That classic fabric soft top, which whirrs and clicks and folds away in a matter of seconds, has so many layers that even when the temperature plummets, you stay snugly cocooned inside.

Which wasn’t a problem during our spell with the car, when the big yellowy thing in the sky made one of its infrequent visits to these shores and actually hung around for a few days.

Click the keyfob and the smart LED day lights initially are blue before fading to a brilliant white – just one of the neat touches adorning the C220. 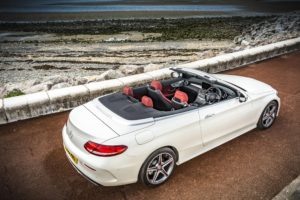 It’s a superbly comfortable car behind the wheel with your ideal driving position achieved by fiddling with the electric control panel on the door. And that might dictate who can sit in the back. While it’s billed as a four seater, and can be used as such, rear leg room is limited if the driver is selfish and demands more space for himself than his occupants. Small kids no problem, anyone over-sized is going to struggle.

Roof down and with the electric rear deflector successfully deployed, wind buffeting is kept to a minimum if you keep your speed this side of sensible. 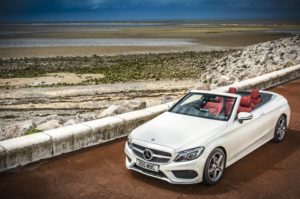 It’s an effective draught excluder, though not in the sense of the old knitted snake your gran used to slap down behind the door, but dip into the performance (143mph top speed, 0-62 in 8.1 secs) and, well, you have been warned. Donald Trump would have a BIG problem….

High quality insulation means noise levels inside – or lack of them – are among the best in class, as is the quality of the switches, buttons, dials and overall fit and finish. It’s a high quality cabin, exceptionally well kitted out, with a predominance of chrome edging, aluminium trim and leather, set off by some tidy black panelling on the centre console.

it’s fairly quiet, warm and windproof. Sound a bit like my garden shed but there the comparison very definitely ends….. 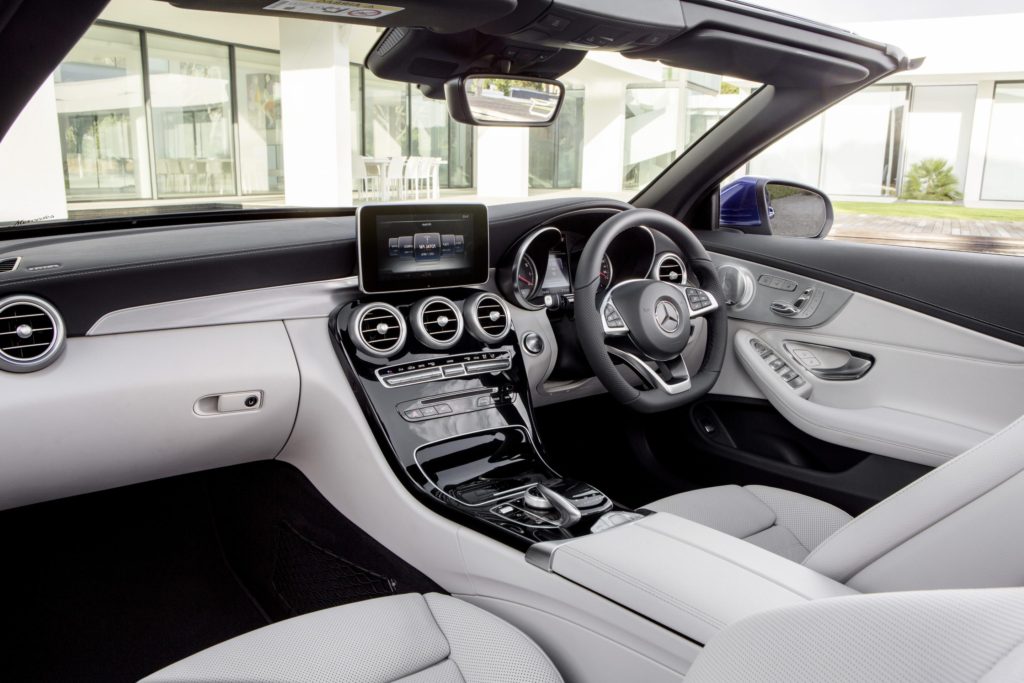 On the road the C220 displays impeccable road manners and poise. The precision when cornering or negotiating the many roundabouts of Milton Keynes is exemplary – no deviation from the line you’ve dialled in via the multi button steering wheel. And scuttle shake – the bane of many a cabriolet – is barely noticeable as the smooth nine speed auto box keeps everything moving along.

C-Class has been a stalwart of the M-B range since back in 1982, but this is actually the first convertible to wear the C-Class badge in all that time.

So, not just the boy Hamilton who has access to a quick and efficient car with the three pointed star up front…..

FOR: great all rounder
AGAINST: highish price for diesel engine