STUDENTS of the natural world will know that the Kodiak is, to put it succinctly, a ruddy great bear.

But now there’s another one around, with considerably less fur and less likely to bite you on the bum.

Skoda – who have had something of a penchant for exotic animal names in the past (Yeti, anyone?) have unleashed their very own ‘Kodiaq’ – and it’s a car that bears (!) close scrutiny. 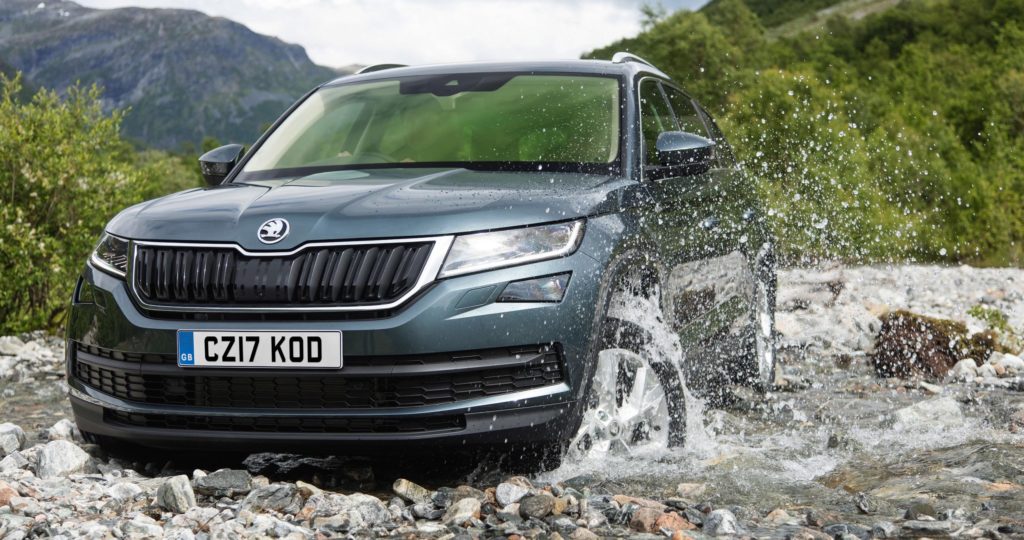 It’s natural habitat will obviously be the highways and byways of our ailing road network, but in 4×4 trim it’s quite adept at heading for the bondooks, they say.

The car we’ve had for scrutiny is the two wheel drive highly-equipped Edition version, in which we stuck to normal roads and racked up a few hundred miles in the comfort of its commodious cabin.

It’s the Czech firm’s first large SUV, and comes in S, SE, SE Technology and SE L trims. There will also be a Kodiaq Scout with an off road bias and a Sportline version.

And with pricing ranging from the 22k mark up to £35,000, that pitches it against some of the top selling but smaller crossovers like the SEAT Ateca, Renault Kadjar and Nissan Qashqai. So, a bit more room and practicality for your money.

It’ll seat up to seven people when needed, as long as those at the very back have very short legs and don’t mind being squeezed in. Five up, there’s room for all and their baggage in the decent sized load area, one of the best in its class. 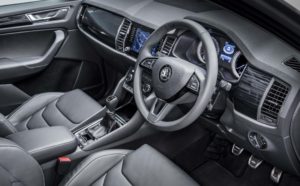 It feels well built and it’s easy to live with, and comes with a good ride and handling balance as standard. You’re not going to uneccessarily push a big SUV like this but its capable of romping along at a fair lick without disturbing the comfort of those inside.

It’s not perfect on rough country roads but it’s not going to have you thinking you’ve made the wrong choice of car either. Possibly because it shares the same platform as the SEAT Ateca which is a well sorted piece of machinery.

If you opt for the Dynamic Chassis Control option, you’ll probably find ‘Normal’ to be the best compromise. Try it and see.

Steering has a light feel but is sharp to your inputs, and the DSG seven speed gearbox will slip through the ratios without bothering you too much.

Small touches that leave a good impression include the umbrellas located in the front doors, the door edge protection that pops out to cover the edge when you’re in a tight parking spot, and the ice scraper located inside the fuel flap for those cold mornings.

Its 1723kg kerbweight means it’s no monster to get moving and for something with a fair sized footprint on the road it returns reasonable economy.

Need space but on a budget? Skoda’s first ever seven seater could be the car for you.

FOR: Comfortable, practical, good to drive
AGAINST: a rear camera would be useful