IT’S a tough one, this – pitching a new car into the bear pit that includes coupe offerings from Audi and Mercedes-Benz.

But you can’t fault Infiniti for trying, and if buyers are wooed by looks alone then the up-market arm of Nissan has a reasonable chance of getting away without too much of a mauling. 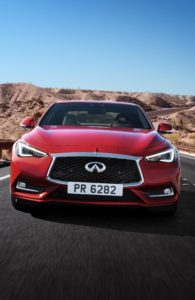 There’s no denying that externally, it’s wearing a smart set of clothes. Someone who knows a bit about style has been wielding the designers pen and come up with a sassy looking coupe that has a purposeful look.

It’s a given that the look of a car should attract admiring glances and this one certainly does. It has a strong purposeful look, And there are some neat touches like the exaggerated kink in the C pillar at the rear, which makes the profile view instantly recognisable.

There’s a choice of a 2.0 litre petrol four cylinder with rear wheel drive, or a 3.0 V6 powering all four wheels. It’s the petrol powered car under scrutiny here, a car which a slightly jiggly ride but which compensates in some way for that by having a snug,comfortable cabin that is as quiet as a church crypt at midnight (just don’t ask, ok?).

The level of noise cancelling employed in the Q60 is impressive. 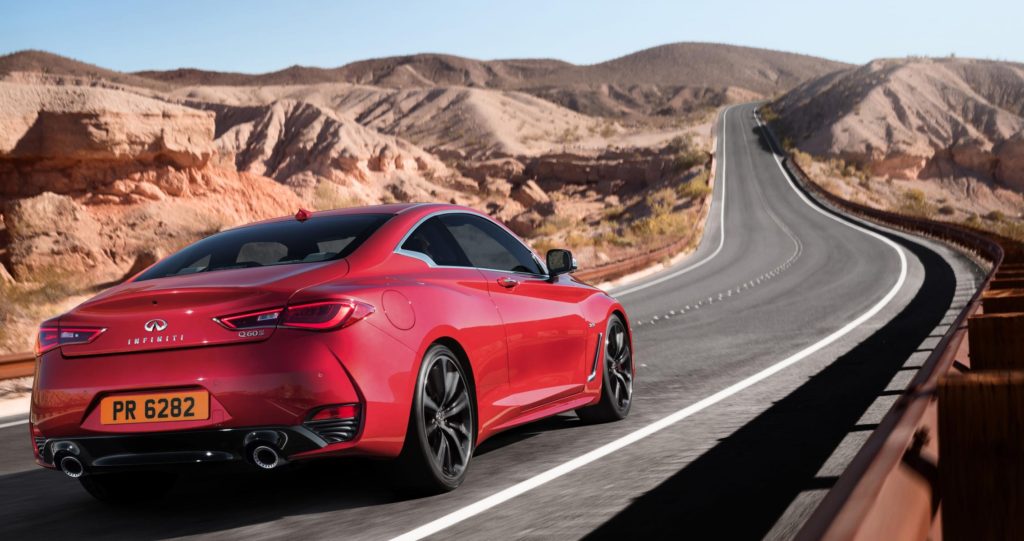 There’s an impressive and lengthy list of standard equipment in this £37,690 car as you’d rightly expect, and the view forward is one of two pronounced wheel arches linked by a vast gently curved bonnet, while inside there’s a lot of information spread across the dash in front of you. The Japanese way of covering all the bases….

Space in the front is generous but those in the back are hampered by a low roof line, a point remarked on by our now fully grown grandson.

There’s a lot to like. It offers a sensible blend of pace, economy and performance, while proving fairly smooth and effective in operation. It has a stability through a series of bends that is reassuring, but the speed sensitive power steering assistance can at times make the Q60 feel a touch unwieldy – there’s a bit too much weight to it as you turn but then in other conditions and a different speed it’s as light as you’ve come to expect cars to be these days. 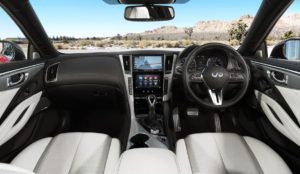 The fact that Infiniti has yet to fully register with the British motoring public could be down to its relatively small dealer network, but ask any fan of F1 and they’ll be fully aware of the brand.

It’s another car that polarises opinion and one which during our spell piloting it around attracted not a single detrimental comment. Not within earshot, anyway.

You’ll likely either love it or fail to give it a second glance.

On paper it’s maybe not as quick and not as economical as its main rivals, but then you’re guaranteed a bit more exclusivity than the Teutonic offerings – and it WILL find favour with those who don’t follow the herd….