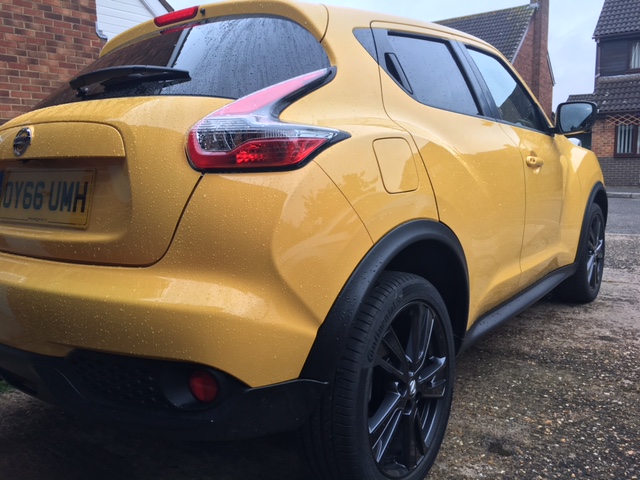 NISSAN’S Juke is a car that stands out from the crowd in any scenario – and that’s before you throw a few litres of retina-detaching bright yellow paint at it.

They even made sure the windows were open, because it’s got a custard coloured coating inside too.

Those quirky looks in its compact chunky body have made it a popular choice for those motorists who stray from the conventional. And there must be a lot of them about, because there are a lot of Jukes about too.

Some have rermarked that the looks are born out of someone working too long, too late and drinking too much strong coffee in the Nissan design office, but there’s no denying that this pocket crossover – the original jacked up small car – attracts plenty of glances. So Mr Late-Night did his job well there. 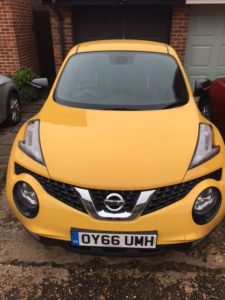 As is the case with a number of cars finding their way into showrooms up and down the country, the NissanJuke is one which polarises opinion into the two main areas of automotive appreciation. You either love it or hate it.

And you can’t make up your mind till you’ve walked round one and taken in the curves, bulges and swoops that make up its outer coating.

A picture might well be worth a thousand words, but is no substitute for the picture that forms in your mind on true first acquaintance.

There’s certainly some creative thinking gone into the Juke. So that’s why you’ll find an interior dominated by a shiny, coloured centre console that looks like it’s been lifted from a motorcycle production line and plonked into this innovative machine.

The seats are smartly finished in the Tekna model sampled here and offer decent support, and they need to because while the Juke looks all ripley muscley without promising too much in the way of speed, even in 1.2 litre DIG-T guise it’s a bit of a Usain Bolt out of the blue. 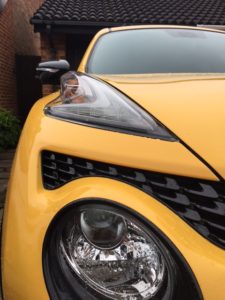 We’re torqueing here about 190Nm spread across the rev range, a decent spread for any table and decent in a car of these compact dimensions, and the choices available include the option of two or four wheel drive.

Innovation is central to every part of the Juke’s design. Inside, you’ll find Nissan Dynamic Control System.
There’s a central command and display module that allows the driver to alter dynamic drive settings as well as easily control functions such as climate control. The system adopts different displays, colours and functions depending on the mode selected by the driver. Whether you give the thumbs up to the gaudy display of colours and rising and falling graphs is down to personal taste.

And the sat nav doesn’t exactly jump out at you, looking small by modern standards. 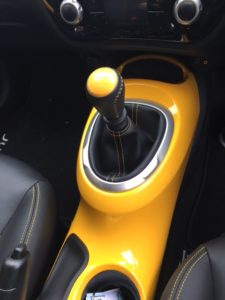 Opting for Sport mode surprisingly made it a smoother proposition at low speed than the Normal setting but we all drive differently and having a choice means we can find what’s best for ourselves.

FOR: British build, quirky looks
AGAINST: not exactly exclusive, cramped in the back