FROM the mountains of Morocco to the leafy woods of rural Buckinghamshire – the Renault Koleos has come a long way.

No longer just another anonymous SUV, the Regie’s latest D sector challenger offers much more than before.

It’s Renault’s D segment SUV in a lineup that includes Scenic and Kadjar competing for sales in what is the fastest growing market worldwide.

Koleos designed primarily as a five seater with maximum room on board and has a long wheelbase with short overhangs, which makes it quite adept off road as we found out on the UK launch when its 4×4 credentials were put to the test.

It has doors that open wider than most to aid access and exit, and you’ll find innovative touches like the one which allows Koleos to memorise the height of the tailgate opening so you can avoid that embarrassing – and costly – moment when it swings up and thwacks your open garage door.

Back in 2008 Koleos was Renault’s first car in this class, so it was even that long ago late for school. We tested that on a mountain range south of the city of Fez in Morocco and it proved to be a more than adequate machine, if a little anonymous and very similar to its rivals.

The 2017 contender is a major step up, with much more of an alluring appearance to prospective buyers.
The interior has a vast feel to it, very spacious and very comfortable too for hours behind the wheel. It has Renault’s now-standard-across-most-of-the-range 8.7 inch portrait touchscreen, a smart piece of kit that looks initially daunting but which is intuitive in use.

The plastics used in the interior look good and whether they’re soft touch or hard is immaterial – you just know you never want your face or teeth to come in close contact with them for the wrong reason.

Headroom is good, even though there’s a big panoramic sunroof in the top of the range model driven on the launch.

Traffic sign recognition is a feature of the new car and woe betide you if you go significantly over the limit it’s showing, which is swiftly accompanied by a red speed sign on the display in front of you, and a flashing one on the satnav screen. A handy alert indeed. 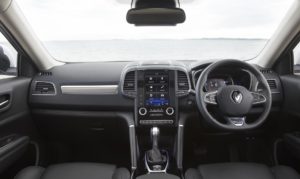 The Korean built Koleos successfully blends the combination of hatchback/4wd/MPV into one vehicle.
There’s good head and legroom both front and rear, and a useable amount of luggage space behind the rear seats.

On the road it’s a fairly smooth and refined cruiser with the 2.0 dCi engine under the bonnet, and off highway its high ground clearance and four wheel drive set up help it cope with all but the very worst of the countryside.

Despite its size there’s a lightness of touch to the steering that makes driving it less stressful than some, and body roll is well contained even when you press on.

One of its endearing features is the way you can get into it and immediately feel at home.

It’s competent, it’s practical and it appears to be well made. But there are a lot of others to pick from and ultimately your choice may simply be down to which ‘badge’ you feel happier living with.

If you opt for the Renault, you’re unlikely to be disappointed.

FOR: bags of room and kit
AGAINST: it’s a crowded market out there