THERE’S not a lot that beats that smug, self-satisfied feeling when you know you’ve made absolutely the right decision.

The knowledge that the car you’re going to be driving for the foreseeable future and writing about regularly ticks all the boxes you set out is a rewarding moment.

The arrival of SEAT’s multi award winning Ateca in 1.4 EcoTSi guise with a smattering of seven speed DSG box to test was one of those moments. 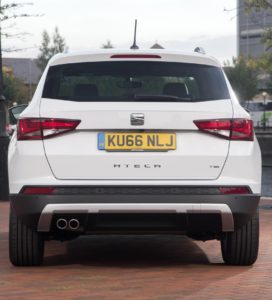 It appeared a few weeks ahead of the SE Technology version with the same engine/gearbox combination that we’ve gulped, swallowed hard and signed on the dotted line for as long term transport.

I knew it long ago (well, on the UK launch last year) and it’s just been hammered home that it is, as everyone says, very good car indeed. But only, obviously, if you’re looking for a small SUV with impeccable credentials.

In 1.4 EcoTSi trim and coupled to a seven speed DSG box, it’s certainly a smooth operator, quiet and refined in normal day to day use, and barely sounds strident when you plant your right foot.

With a useful 150ps on tap and 250Nm of torque, safe and swift progress is never realistically in doubt. Its cylinder-on-demand technology, dropping down to two in use as conditions dictate, means it should be pretty economical in use. SEAT quote an average of 51.4mpg and I managed to get within eight of that on a lengthy cross country run, so room for improvement.

Smooth progress can be hampered a bit if you use the automatic park brake function, set via a button behind the electronic handbrake. It make the Ateca involuntarily jerk as it pulls away, something it’s not guilty of if you avoid using the button.

The overall on road sensation is one of poise and precision, and even though the body is a touch taller than the Leon it takes much of its good bits from, everything has a controlled feel to the way it conducts itself – and that’s why it’s attracted so many plaudits in the year since it was launched.

Our test car came with optional 19 inch alloys, which most pundits say do nothing to improve the ride quality of what is a well-sorted set up. It will be interesting to compare the 18 inch alloys performance on our long term model.

The driving position is adaptable for all shapes and sizes with the steering wheel adjusting for rake and reach and the drivers seat up and down as well as fore and aft. And because you’re sitting a little higher than normal, access and exit is much easier to attain.

The ‘standard-on-SE-and-above’ SEAT Drive profile gives you a number of options to set Ateca up to mirror your own preference – for example, Sport will add a bit more weight to the steering, which has a light feel to it in normal mode, and switch the gearing to Sport so ratios are held a bit longer. Other options are Eco and Individual, all via the dial in the centre console.

For a car that’s SEAT’s first foray into the SUV market, it’s a commendable effort. Subsequent cars, like the smaller Ibiza-based Arona due later this year, have a very tough act to follow.

FOR: Leon-esque in familiarity
AGAINST: long waiting list if you want one