LIKE an iceberg, the Audi Q5 is not so much about what you can see, but what lurks beneath.

Here is a car with a lot of high end electronic trickery – you’ve all seen the cinema and TV ad, and probably though ‘how can they do all that?

What you get from all the electronic wizardry whirring away out of sight is a serene, bump-soaking ride, even when you throw it at the worst and twistiest roads the lanes around Milton Keynes can muster up. You know there are potholes you just can’t avoid but the way the Q5 smoothes it all out so the ride quality for those inside doesn’t unduly suffer is commendable.

The way a series of sweeping bends that turn into ones tighter than you might want to encounterin no way phases the Q5. Done, dispatched, on to the next one.

The new model is some 90kgs lighter than the original, which pays off with the fuel bills.

The profile has a reassuring similarity to it – Q5 is only in its second incarnation but is firmly established as one of the more popular premium SUVs on the market. So no need for widespread cosmetic tinkering.

But there’s still a definite Q for quality here – the Q5 oozes it from every pore.

It gives you all the advantages of a versatile SUV with the road dynamics of a car. And while it drives very much like a car, it comes with that all-commanding view of the road that you just don’t get from anything that hasn’t been pumped up.

It’s very driver focussed and offers impressive pace and response – the sort you expect from a sports saloon and not necessarily a car of these dimensions. 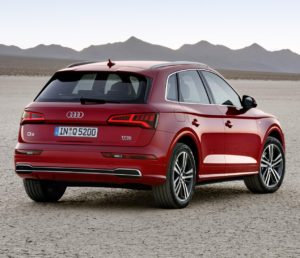 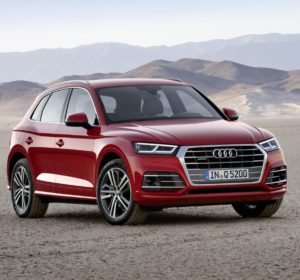 There’s no doubting the fact the 2.0 TDI diesel in 190ps guise with its 400Nm of torque makes this a fairly rapid family SUV, well capable of mixing it with its rival German brands as well as cars like the Volvo XC60 and Jaguar F-Pace.

The seven speed automatic box in the four cylinder diesel is excellent, with rapid, smooth shifts and software that does a decent job of kicking down when necessary. And you’ve also got the paddles behind the steering wheel to shift manually.

The clarity of the instruments, which are digital if you add in the optional Virtual Cockpit, and the logically positioned buttons on the dash all add to a stress-free trip behind the wheel.

Audi’s MMI infotainment system, with its rotary controller and shortcut buttons, is easy to use on the move and better than some rivals. 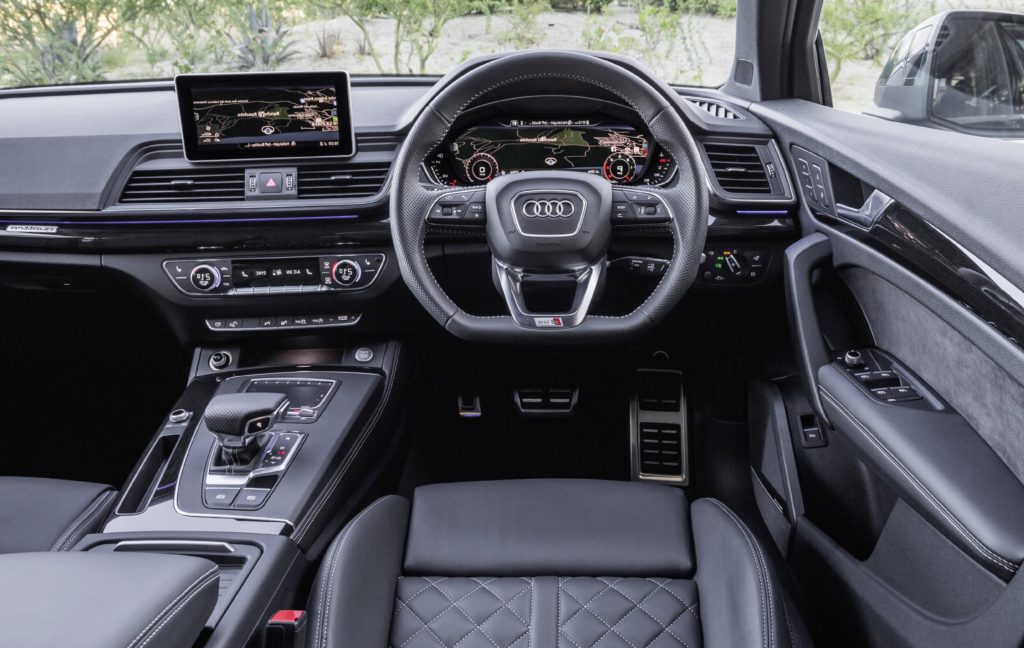 The versatile and variable five seat cabin can be adapted either to carry its passengers in sumptuous comfort in the leather clad seats or it can show its load carrying ability by dropping the rear seat backs to offer up a large load area.

All Audis are well equipped without exception, with a lengthy options list awaiting your scrutiny, and of course the safety credentials are enhanced if you’re behind the wheel of a quattro equipped version, as we were here.

There’s no doubting the car is comfortable on the road and it has that impeccable attention to detail on the interior that has become something of an Igolstadt hallmark and now expected on every new model as they arrive.

With the latest Q5 now being built in Mexico let’s hope they can keep that up.

FOR: comfortable, refined driving experience
AGAINST: cost of extras