BACK in the day when the driving examiner put a tick in the box that said I was safe to take to the Queen’s highways on my own, entry level cars – or poverty-spec as they were sometimes known – were about as luxurious as a cave.

But not any more, The car under scrutiny here, Kia’s three cylinder 1.0 Picanto 2 (actually one up from the bottom step of the ladder) might be down in the £10k price range, but there’s a reassuring amount of comfort to be had for your money.

Air con, electric rear windows, electric heated door mirrors, Bluetooth with music streaming, a four speaker audio system, high gloss black facia trim and 14 inch alloys are all part of the package. Obviously it gets better the higher up the range you go, but even the entry level model makes a fair first of not appearing to be an entry level model.

Small, well engineered cars make a lot of sense in this day and age. Congestion on our roads is never going to get any better, particularly with so many from other shores taking up residence here now, so the need to take up a small footprint on the road has something of a growing significance.

City car buyers don’t want anything big, so the third gen of the Picanto is exactly the same size as the one it replaces. Size matters though in some areas so they’ve worked a bit harder to make passenger and luggage space more user friendly. 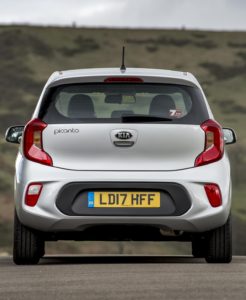 And you won’t be spoilt for choice, with no less than nine versions on offer, two engine choices, two transmissions and five trim levels – 1, 2,3 ,GT-Line and GT Line S – the latter two bringing a sportiness not see before to the Picanto, which now only comes as a five door car. That decision was made because figures show three door models only account for 10 per cent of sales, and even that’s on the wane.

New Picanto is based on a platform built using twice as much high strength steel as its predecessor, so it’s now stronger and safer as well as its other attributes.

Engine choice is limited to petrol variants – a 1.0 three cylinder 66bhp unit and a four cylinder 83bhp 1.25, with a 99bhp three cylinder 1.0 litre T-GDi unit waiting in the wings.

The 66bhp lump give off the usual buzzy vibes of an engine missing 25 per cent of the norm, but because the dimensions are compact and the weight successfully pared back to a sensible level, its forward progress is not impaired. The workmanlike sounds that emit from under the bonnet are something you’re either going to love or steer well clear of, but if you’re only going to do round town motoring in it then you’re not going to fall out of love with it overnight.

The fuel consumption figures claimed are falrly impressive on paper but as in most cases, notoriously hard to achieve in real world driving. You shouldn’t find yourself filling its seven and a half gallon (35 litre) tank too often though.

Smarter looks with its big mouth lower grille and trademark swept back headlights give it that Kia family look that will find favour with those looking for a smart city car that won’t break the bank and comes with a warranty longer than most prison sentences these days….

FOR: tidy styling, quite roomy
AGAINST: but too eager off the mark