IN a world where retro is cool, a few years ago Fiat brought back to life a car that they originally unleashed back in 1957.

It still has its cutesy looks, and if you’ve never experienced the original it doesn’t look a lot bigger. But it is.

Compare old and new side by side and the difference is startling, even though the 500 circa 2017 is a small city car.

You just can’t imagine the average Italian family cramming into the original. Even now, if you’re broad of shoulder and long in leg, you can feel a bit like you’re ‘wearing’ the 500.

And this one’s got an engine, a real engine.
In the original, you were lucky if you got 60mph out of it – and that was downhill. And with a strong following wind.

Now, not only can you keep up with swiftly moving town traffic, you can – should the need overcome you – overtake other motorists too.

But Italian cars are meant to be driven briskly, aren’t they?

Well, not this one. It’s fine and dandy ambling along at suburban traffic pace, and the gearchange doesn’t give any hint at what’s to come if you attempt to stir things up a bit.

Like the new Micra sampled a week or so ago, there’s a dropping off of impetus between the lower gears before it decided to pick up again. You can forgive the Japanese car for that as it’s only powered by a 900cc engine, but the Fiat has a 1300cc multijet so you’re not wrong in expecting better from it.

If it’s performance you’re after then you’ll be looking at the Abarth version anyway but it does make the 500 shoulder saggingly disappointing in this particular area.

‘Fix It Again Tony’ is the unfair tag applied to the Fiat name which certainly had some credence years ago, as I recall to my cost, but not so much now. I wouldn’t hold your breath these days waiting for a problem because you’ll end up with a purple face.

And gone are the days when everything built in sunny southern Europe and exported north would suffer from rampant Milanese tin worm. 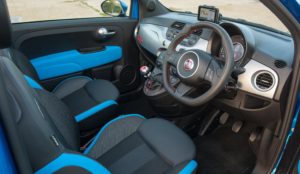 What you get now is a well sorted and user friendly city car that’s not just for the girlies out there – more often than not you’ll see a bloke behind the wheel of one.

On the road, once you’ve got comfortable behind the wheel which is surprisingly easy even for those getting close to the 2 metre mark in height, the little 500 displays ride and handling characteristics that are no better and no worse than the class norm. The handling is sharp enough so expect it to bring a smile to your face because it’s a fun little car to drive around in.

We’ve been looking at the 1.3 diesel engined version here in S trim. And the first question on our clipboard is ‘how can something so small cost so much?’ This model, with a few extras like its Beats hifi, special paint and seven inch touchscreen, comes in at a shade over £17,000. While you can get four compact people aboard and the boot is of a useable size at 185 litres, it tends to put it in the ‘indulgence’ stakes rather than the ‘everyday practical’. 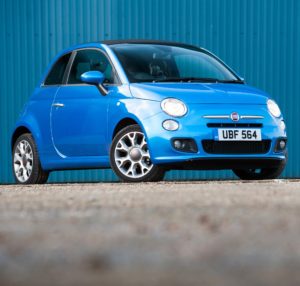 Not to say you couldn’t quite happily use one every day because it’s easy to drive and there’s little problem locating the extremities when parking.

The cabin is snug and fairly well appointed, with a large digital display ahead of the driver with all the essential information.

Still a popular buy 60 years on.

FOR: That Italian retro style
AGAINST: