PEOPLE all over the place are suddenly waking up and rubbing their eyes in disbelief – Nissan have made a Micra they’ll be queueing up to buy.

The rather staid and workmanlike versions of latter years have given way to one that has definitely been eating its Shredded Wheat in big bowlfuls, and morphed into a shape that is the polar opposite of the car it replaces.

At the risk of alienating all those motorists who drive the old Micra with a travel rug on their front seat passenger’s knees, this might be a step too far for you.

But to the young motorist of today who doesn’t want a huge insurance bill to go with a car that looks the bizzo, it’s allofasudden a decent alternative to the Ford Fiesta, Renault Clio and VW Polo among others.

The Micra gas been around in various guises since 1983 and has been a vital tool in Nissan’s sales push for over three decades.

The new model is only available as a five door, but with the rear door handles ‘hidden’ in the C pillar at the back, it has the first-glance appearance of a three door.

There are only two engine options – a 900cc turbo petrol sampled here, and a 1.5 diesel, and both come with a five speed manual gearbox.

It feels pretty light and agile on the road, and the small engine gives a decent account of itself, acceleration being adequate and reaching the 62mph mark in around 12 seconds, fast enough for the predominantly prevailing conditions these days. It’s certainly a lot better to drive than Micras of old, and you feel more involved, not just a nut behind a wheel.

And it’ll suit most users, as superminis tend to be used over shorter distances, making the version a slightly better option.

AS it’s bigger than before, it follows that there is more room inside for its occupants. Head and legroom is improved up front, but the slope of the roof at the rear means it’s not one of its strong points for passengers in the back.

You get a choice of five trim levels: Visia, Visia+, Acenta, N-Connect and the range-topping Tekna. All come with Bluetooth as standard, as well as auto emergency braking and a lane departure warning system.

The Tekna variant sampled has 17-inch alloys, keyless go, a rear-view camera and a Bose audio setup. It also had exterior and interior personalization packs in Energy Orange adding £950 to the bill and adding a bit of bit racer appeal to the Echo Grey paintwork of the test car. 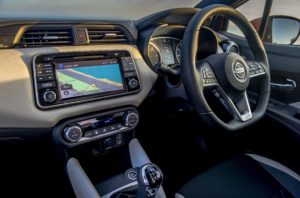 The very much up to date styling is matched by the interior with fit and finish a big step forward too.
Contrasting colours are a big feature on the options list but bear in mind you’re going to have to live with the car for a few years so choose wisely. The Energy Orange dominated interior of our test car was fine for a week, but living with it for the foreseeable future might lead to the love affair waning….

More user friendly than ever before, the 10 litre glovebox being capable of holding a two litre drinks bottle, and you can get a one and a half litre bottle in the door bin. The centre console also gives you plenty room for storage.

There’s a seven inch touchscreen with NissanConnect on higher trim levels, and Apple CarPlay works on all trim levels.

FOR: Great new look
AGAINST: not such a budget buy any more