HERE’S a new car from SEAT that looks a lot like a scaled-down Leon – and why not?

It’s big brother has been doing the business for the Spanish manufacturer for a few years now so no one should feel in the slightest way guilty if some of the styling cues that made Leon such a hit were borrowed for the latest Ibiza.

In a world where the Fiesta has been the undoubted king for decades, the Spanish upstart throws down the gauntlet and gives a very strong hint that the family favourite Ford might not have it all its own way for much longer. 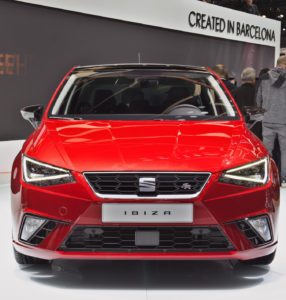 There’s a growing groundswell that bemoans the fact many cars these days bear a marked similarity to each other – the end result of manufacturers seeking pretty much the same solutions at the design stage, with a few exceptions.

And this is one of those exceptions, a car that feels much more grown up and a better all round package than the version it replaces. It’s now only available in five door form, but while those extra doors at the back on some superminis look like an afterthought and hence are restrictive for those piling into the rear, in the Ibiza they just look an essential part of the overall package.

It’s a very tidily styled car (as is Leon) and proves that the Spaniards aren’t just good at sticking spikes in extremely annoyed bovines but can turn their hand to slick car design too.

The handling is as sharp as the stylish bodywork. There’s a lovely light clutch and equally deft five speed gearbox that work in harmony with the power steering – very positive when you need to change direction – and that helps to make manoeuvering in town traffic or zipping along a country road a far less taxing experience than it sometimes can be. Behold a sensibly priced car with sporty credentials that’s fun to drive.

This is the fifth generation of Ibiza. Remember the first ones, with ‘System Porsche’ emblazoned down their flanks?

This one is also a first – the first VW Group car to use the latest MQB AO chassis tech, which you’ll also get on the new VW Polo, Audi A1 and Skoda Fabia in the future. 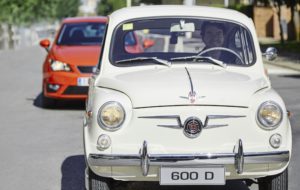 Its adoption has certainly turned a car that’s been in the Fiesta’s slipstream in the past into one that might even be edging slightly in front in the race to be the best. Yes, it’s that good, even with an engine that’s one cylinder short of a full engine bay but which you can’t knock for sheer enthusiasm.

The 1.0 three cylinder in the FR version sampled here has that distinctive gravelly thrum under acceleration, which I’ll concede might eventually become a tad tedious. But what you won’t ever tire of is the crisp handling and lack of vagueness as you turn from lock to lock through a series of tight bends. This is a well engineered car.

It’s available in SE, SE Technology, FR and Xcellence trims and there’s a lot of safety, technology and top spec kit, dependent on model. Three versions of the three pot engine, in 74,94 and 114bhp configurations are available.

it’s much wider, a touch lower and a fraction shorter than before but the added width actually makes it feel like a bigger car.

It makes a good fist of being an economical and user friendly small hatch. Good space for passengers and luggage, built to a decent standard and a car you will instantly feel at home with.

FOR: sets new supermini standards
AGAINST: options can jack up the price