WITH the rest of the Volkswagen Group brands on lap two, Volkswagen themselves have just laced up their trainers and headed for the starting line.

Only now are customers being offered a compact VW SUV in the shape of the T-Roc, to compete for sales against the SEAT Ateca, Skoda Karoq and Audi Q2.

The latest VW challenger sits below the Tiguan in the range, their only other current SUV being the rather larger Touareg. But it’s the start of a major push by the German brand with the Tiguan Allspace due next year, followed by the T-Cross Polo sized crossover.

The Golf sized T-Roc has a race on its hands to compete against the rest of the group, never mind the seried ranks of the rest of the motoring world like the Peugeot 3008 and Nissan Qashqai, but initial impressions point at it being a highly competent alternative.

Or, put another way, a compact VW SUV for brand loyal motorists who have been waiting for just such a car, rather than switching allegiance to another marque. All things come to those who wait….

Flair and functionality are keywords in the push for sales here, with a tidy range of exterior colours backing up the first and an adaptable interior the latter. There’s a new distinctive front end design, and the lines are crisp and sharp, with smart curves picking out the wheel arches.

SEL spec is the range topper and feels so, the interior offering a touch more class in its finish and trimming. 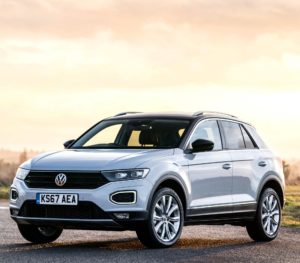 Trim levels are S, SE, Design and SEL, with prices starting at £18,950 for the entry level S spec with the 1.0 three cylinder engine – a great little unit which is expected to be the best seller. It’s responsive, which is what you want, a willing worker that won’t let you down, and 80 per cent of T-Rocs sold here are expected to be petrol engine.

If you need more power then the 1.5 150ps EVO engine offers a smoother experience. It’s quicker and more flexible. 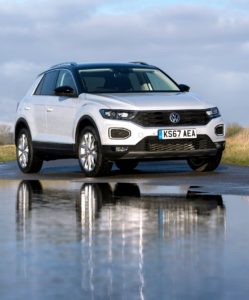 Add the optional Dynamic Chassis Control and you can soften or firm up the ride to suit conditions.
The dash has one long straight sweep from side to side, which gives it a plain, workmanlike appearance, but below it you’ll find a clear and centrally located touchscreen, with the main instrumentation on the screen ahead of the driver varying dependent on trim, SEL getting the full TFT treatment, and therefore lots of info you can dial up on the display in front of you. 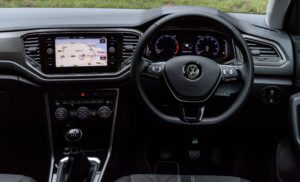 There’s plenty of room inside, as you’d expect, and T-Roc can be specced with body-colour dash inserts – a new departure for VW, and one that really works, dependent on the colour….
You pay your money and you make your choice.

* HISTORY LESSON: VW sold just two cars during their first year in the UK back in 1952. Last year they finished second in the sales chart behind Ford with 207,020 cars sold.

FOR: a different sort of VW
AGAINST: a bit tight in the back