YOU can forgive the Toyota RAV 4 for being slightly off radar when you sweep what’s available in the SUV stakes.

It’s a car that was one of the SUV trendsetters many moons before cars like the Nissan Qashqai came along and stole the limelight, but while it was in at the start of the stampede to own a crossover, it’s never really had the wow factor over its contemporaries. Unless you’re a loyal Toyota driver who basks in their ‘does what it says on the tin’ legacy of good, honest, reliable motoring.

It’s got that off road look, is available with either front or all wheel drive so can cope with surfaces other that your average potholed blacktop, and running costs that aren’t too far removed from your average family hatchback.

The modern day RAV4 shows how far the model has come from its 1994 predecessor but it still somehow lacks the spark of its main rivals, to be honest.

On all Toyota hybrids, when the vehicle is being driven the electric motor is always operating. The petrol engine will stop and start at any speed to maintain the best possible balance between performance and efficiency according to driving conditions, driver inputs and other factors.

Obviously there has to be sufficient charge in the hybrid battery for EV mode to be engaged and how it works depends on your smooth and gentle use of the throttle as well as other things that draw on the electric power like the air con and heated rear screen. 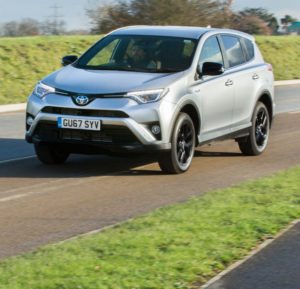 If you’re light on the right hand pedal then you can drive the Rav4 with zero emissions and fuel consumption , like in slow moving traffic. Smooth acceleration also helps to achieve better efficiency, but if you’re not a 30mph type of driver then achieving the perceived benefits of hybrid motoring might well be beyond you. That said, petrol-electric versions apparently account for two thirds of UK sales.

For family use, it’s just the job. The cabin is big, so all occupants get a decent amount of room. A cabin where handles are handy as body roll is fairly pronounced when pressing on.

The interior finish is good, not overburdened with hard plastics but it lacks a bit of sparkle. You, like me, might find the staggered gear gate for the CVT transmission a bit of a throwback to the past when rivals offer auto boxes with short shift levers, and the lack of backlighting on the door mounted window switches is frustrating when you’re driving at night.

That aforementioned CVT can be noisy under acceleration but it proves smooth in use and the noise level is fairly non existent round town and on a motorway.

The ride is acceptable and so are the levels of grip but it lacks the nimble feel of many of its rivals for your money.

But it’s workmanlike – a car for people who don’t need fancy frills or drop dead looks. It’s a car. A big car, with space and practicality on its side, and like a Labrador, it’s trusty and reliable. 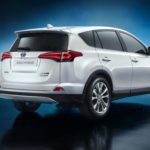 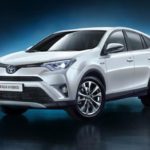