I RECKON Volvo have got it all wrong with the naming of their big luxury estate car.

It really shouldn’t be called the V90 Cross Country – Cross Continent would be more appropriate, because it’s the kind of superbly appointed vehicle that you could drive for mile after mile after mile without showing any sign of strain or tiredness.

Born out of a long line of big Volvo estates from the past, its latest smart new look doesn’t mean they’ve forgotten what most of us buy Volvos for – practicality. There’s still that vast amount of boot space before you even think of folding the rear seats.

A pleasant mix of brushed metal inserts, very acceptable quality plastics and soft leather greet the occupants in what is a typical functional Volvo cabin, with a decent amount of room for all the occupants, their luggage and labradors.

Strong on practicality and with a truly upmarket cabin where the nappa soft leather upholstery is stitched to perfection, the dash area is more minimalist than a Jamie Oliver recipe, in that there are no superfluous buttons and switches to spoil the pure design and look of the interior. 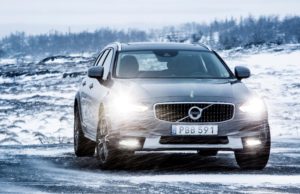 I’ve never known a car to defrost – and I mean DEFROST – as quickly as this one. Press the necessary buttons and the front and rear screens are ready for action in next to no time.

But then the Swedes probably don’t like to hang about on a cold and icy morning as they’re an industrious bunch. They’ve got furniture with funny names to design and build for IKEA, and best selling albums to produce if you’re a four piece Eurovision winning band.

And it’s not a car where you can legitimately do an Arsene Wenger and say ‘well, it was a bit of a letdown’ because its 235hp and 480Nm of torque gives it more than adequate punch when you want to get past something on a twisty A road. Even the extra ground clearance has not had a detrimental effect on the ride quality in my opinion. 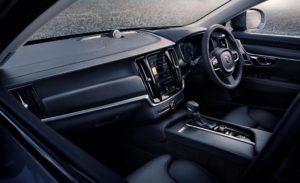 It kind of alludes to the fact that Volvo have set their sights firmly on a new breed of owner – one a bit younger than past customers and who doesn’t necessarily need a tartan travel rug for the knees of his front seat passenger.

I can fully appreciate why people who have hair that’s maybe a bit lighter in colour than some of their neighbours would want to drive a car like a Volvo. But it’s not just silvertops who buy them, as I know a couple of younger humanoids who are very definitely fans of the Swedish marque. They want to feel that they’ve bought into something that is top quality, they want to be comfortable and above all else they want to feel safe at the wheel. Volvo does this quite admirably.

Volvo drivers don’t take risks. And you wouldn’t be with one of these.