RS. Two letters that sum up the importance to Audi of having products that are the pinnacle of their product range.

Premium brand products account for over 30 per cent of total UK car sales, mainly because they keep their residual values better than others.

But it’s also an aspirational thing for the buyer, and sticking an RS in front of the model number can make it a bit of a lifechanger. 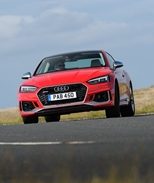 For not only have you arrived at the higher echelons of Audi ownership, you’ll also arrive everywhere you go a darn sight quicker than in a regular cooking model – no slouches themselves, it has to be said.

The marque has gone from a 17 model range to 53 currently in the space of just 17 years and it’s a case of being production limited rather than demand limited. They confidently boast they could sell a lot more if they could get more from the factory.

Take the TT RS – a car that in terms of performance has figures akin to the super sleek R8. This year’s production run is sold out already so your deposit cheque could be sitting on a desk for a long time. January 2019 to be accurate. 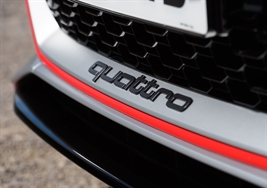 If you’re lucky – and well equipped in the wallet department – you might still get your hands on the all-new RS5 Coupe which lights the afterburners and hits 62mph in less than four seconds. An experience that is, quite simply, intoxicating.

It has a limited top speed of 155mph. If you want more it can be derestricted and romp on to 174mph. But probably only if your name is Hermann and there’s a convenient traffic free autobahn down the road.

There’s an excess of carbon fibre effect brightwork in the cabin, which might not be to everyone’s taste, but Audi has a reputation for an extensive options list so there will be something in there to suit your taste. 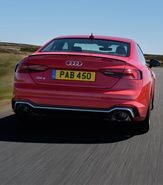 Power delivery is so smooth but can also be brutal – a real poke in the kidneys as the quattro system bites and the headlong rush to the next corner dominates your mindset for the brief spell it takes to get there. Then it’s surefootedly through the bend and the process begins again. It’s as seamless as you’re able to make it.

Refinement is a word that keeps coming back to you – even on the potholed backroads of Northamptonshire, where the Audi’s ability to ride the worst of them was impressive.

Hounds howling at the gates of Hades couldn’t make a much more attention grabbing sound than the gases being ejected from the big oval tail pipes. The induction roar is manna to the ears of any petrolhead, as is the spit and crackle as the eight speed tiptronic box goes about its business.

The merest touch of the throttle summons up all you need for a very rewarding spell behind the wheel. 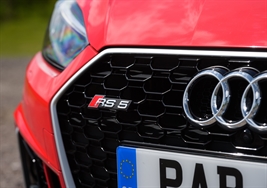 If your budget doesn’t quite stretch this far then the RS3 in saloon and hatch guise is a very acceptable entry point to Audi RS ownership at £44,725, while the RS4 Avant (£62,175), with the same 2.9 litre TFSI 450ps engine as the RS5, is arguably one of the finest estate cars you can buy for combined practicality, power and performance.

In fact, substitute the three Ps for 3 Ss – swift, surefooted and sounds spectacular!

FOR: sheer desirability, supercar performance
AGAINST: it might be a long wait