A PUMPED up Clio doesn’t necessarily have to be one with a breathed-on engine under the bonnet.

Renault’s Captur is built on the same platform but employs jacked up suspension and a higher driving position to turn it into a small SUV that has proved a very popular addition to the range – a car for those who find the Clio too cramped but don’t fancy a Megane or Kadjar. 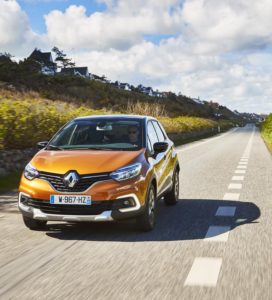 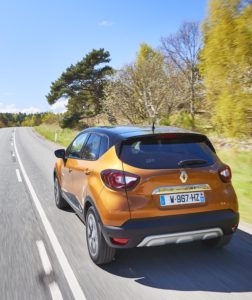 The model was mildly tweaked last year with a revised nose and more premium material inside, as well as a general upgrading of the kit on offer. Full LED headlights are available for the first time, and it has C shaped LED daytime running lights too, sitting low down in the bumper.

There’s a sliding rear bench, giving you the option of better bootspace or more legroom, and soft touch materials have upped the ante inside.

What you get, as well as a pretty distinctive car, is something that bundles together the versatility of an MPV with the scaled down looks of an SUV and all the good bits of family hatchback ownership – predictable ride and handling, good space and decent economy, if the diesel engine sampled here is anything to go by.

Weighing in with a modest 1461ccs, the famously frugal 90hp diesel has a very adequate torque figure of 260Nm, which imbibes it with acceptable punch. An 11.4 second 0-62 time is adequate, and there always seems to be enough urgency under your right foot to get it up and running. 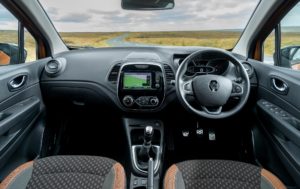 The official fuel figures hint at a combined figure of over 76mpg – fine if you can attain it; anywhere into the 60s will bring a smile to your face and an appreciative sigh from your wallet.

Where you can be led up the garden path, though, is in thinking something called a Dynamique S is going to be dynamic. It isn’t but while the Captur isn’t the most exciting car you can trade your cash for, it will still serve you well.

Being slightly higher than the norm, with 200mm ground clearance, means getting captured by the Captur is easier than most, and building it on the underpinnings of the Clio means its handling characteristics are well ironed out. It’s slightly longer and wider to give more cabin and load space but despite the extra height it still feels stable enough under most circumstances.

A neat touch is that the seat covers can be unzipped and lobbed into the washing machine at home if they get grubby. Handy if you’ve got dog that don’t wipe their feet when they get in the car. The boot area too is well thought out – it’s carpeted on one side and finished in easy-clean rubber on the other if your weekend activities involve getting down and dirty….

There’s a wide array of colour personalisation packs extending across the upholstery, trim details, wheels and external styling bits, and you can also opt for a two tone paint finish.

That big Renault diamond logo features big and proud at the front end so there’s no doubt what it is, and it sells well for the Regie. But the small crossover market is almost full to bursting point, so there’s plenty of choice out there.

FOR: tidy looks, popular
AGAINST: falling behind