SORENTO is the car that Kia acknowledge changed the way the world viewed the brand back in 2002, and the latest offering has what’s dubbed executive-class space – you and I might prefer to refer to it as vast.

Everyone certainly gets plenty of room, so much so that you’re constantly aware of the size of the cabin – and that you’re not occupying very much of it on your own.

Even the third row of seats in this seven seater has decent enough space.

It’s versatile with a capital V, and with that back row safely stowed, there’s a very useable amount of carrying capacity.

The updated third generation flagship has new GT-Line and GT-Line S variants to add a bit more of a sporty feel, if that can actually be achieved in something that just about manages to squeeze into your average car park space.

A new eight speed auto replaces the former six speed unit, which helps to reduce fuel consumption and emissions, and intelligent all wheel drive is standard.

The new gearbox was designed and engineered in Korea and gives you the choice of up to five different shift and throttle programmes – which change the character of the Sorento -through the Drive Mode Select button on the centre console. One of many buttons dotted around the cabin for a multitude of functions. 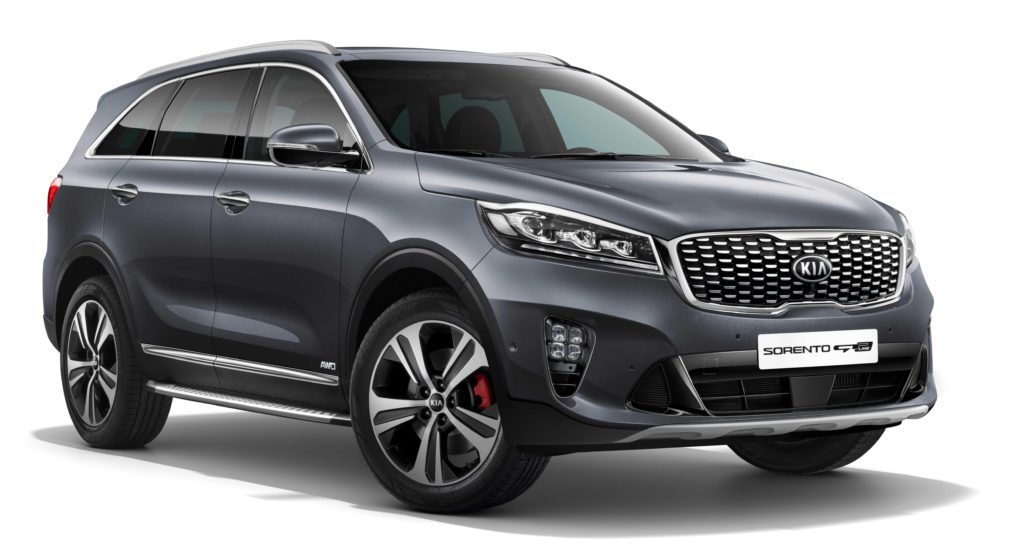 Its sheer size means it’s well planted on the tarmac, and that all wheel drive gives just that little bit more reassurance when conditions deteriorate.

All Sorentos are powered by Kia’s 197bhp 2.2 litre turbo diesel. It’s got an angry roar under acceleration – it is a diesel, after all – but it produces a very useable 411Nm of torque from just 1750rpm, endowing it with reserves of driveability in all situations.

Normally you’re getting 100 per cent of engine torque to the front but it can be split 60:40 front to rear. Sorento has the electronically controlled Dynamax all wheel drive system, which continuously monitors driving conditions and anticipates when you’re going to need power to all four wheels.

And all models have Intelligent Stop & Go so no fuel is used and no emissions released when you come to a halt. 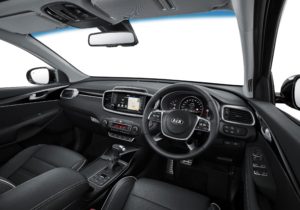 Stepping up into the Sorento – you can use the running boards if you’re a little bloke with big car syndrome – gives to a commanding view of the road.

There’s very little chance of finding plastics that would look cheap on an African wheely bin here. Kia pride themselves on serving up a premium quality feel to their cars, and they’ve had a decent enough stab at it here, given that there is a lot of plastic on the vast dash area.

Take for example the shape of the bottom of the windscreen, which has been carefully crafted to emphasise the car’s width, and the fact the many buttons and switches are grouped according to function. Instrumentation is classic, clear white-on-black graphics.

Depending on which model you choose Sorento will arrive on your drive with a host of state-of-the-art safety and convenience features, like blind spot detection, rear cross traffic alert, around view monitoring and speed limit information. GT-Line S, as you’d expect from a top of the range model, has more toys than Hamleys.

FOR: long warranty
AGAINST: lot of competitors