SOMEONE at SEAT must have bought a blooming big bag of ‘A’ letters at a Spanish car boot sale a while ago.

We’ve had a succession of models with names beginning and ending in that letter: Arosa, Alhambra, Altea, Ateca and now comes the Arona – the latest in a line of cars that have progressively built up the profile of the VW Group owned brand to a level where their popularity is considerably higher than in the past.

SEAT are going places – just like the customers who are finding the sporty aspirations of the latest models to their liking.

Arona – an Ibiza SUV – is a baby version of the popular Ateca, and the twin exhaust outlets on the FR version sampled here add to the sporty appearance of the newcomer, and further enhanced by the two tone paint finish – copper bronze body topped by a grey roof and tidy alloys.

It shares the same chassis and engines as the popular supermini but obviously sits a bit taller on the road.

There’s a more than sensible amount of standard equipment on board for your sub 20k price tag.

The 115ps 1.0 litre three cylinder engine under the bonnet has had plenty words of praise heaped on it since the VW Group introduced it a while back, and it’s safe to say it does a creditable job of moving the Arona around.

Maybe it sounds less refined than you’d expect a smart car like this to be and there is some noticeable vibration through the pedals quite a lot of the time but it scores on efficiency, a willing little worker buzzing away and imbibing the Arona with acceptable performance.

The fact the engine is used and adapts well to so many VW Group products speaks volumes about its useability.

A sub 10 second 0-62 and decent torque makes it well able to keep up with and in some instances out-perform the rest of the traffic around it.

Ride quality is more than acceptable for a car of this ilk and there’s a decent amount of interior space for the occupants. It’s maybe not what you’d call luxurious but then that’s not what you’re buying into at this level of the market. Not yet anyway.

It’ll give you good, honest family motoring and when you want it, a bit of dynamic driving too as the drive select button gives you a few option settings. 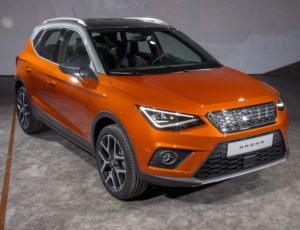 Matching the claimed fuel economy is something you could spend a lifetime trying to achieve, and if you work the three cylinder hard it develops a thirst, but there are diesel variants that sip instead of gulp at the contents of the tank.

SEAT have taken a different approach to the Arona line-up by not having an entry level model with everything extra which traditionally very few people would ever buy anyway, so as a result the residual values are expected to hold up well, as they do with Leon and the popular Ateca. The poor reputation of the past has been successfully dispelled.

The arrival of Arona means the transformation of the company has move on yet another step.

FOR: above average for this class, decent equipment
AGAINST: short on thrills