THIRTY six thousand pounds will buy you a pretty decent car these days. It’ll also give you a staggering amount of optional extras to add to your limo to make it even more user friendly.

That amount brings this weeks car under scrutiny, Audi‘s A8 L, up to an on the road price of £108,600 – and it’s probably a small price for a top line exec to pay for a car that oozes quality and style.

Once upon a time it was the S-Class Merc and 7 Series Beemer that ruled the roost in the chairman car park space up and down the country.

They’re probably still a decent enough option – I couldn’t honestly say as I haven’t sampled either for a few years. But what I can divulge with a fair degree of certainty is that the big Audi is a very decent proposition if you’re in the market for stretching out in the rear and reading important paperwork or making important phone calls while someone else occupies the seat up front. It wasn’t named World Luxury Car 2018 for nothing. 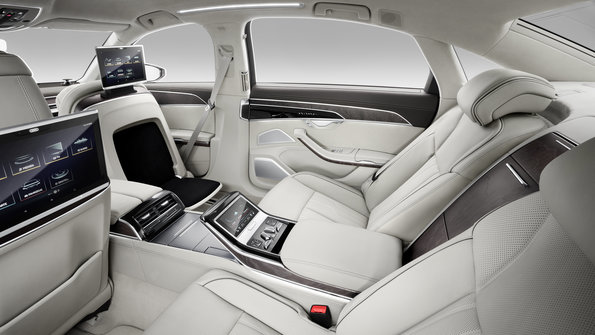 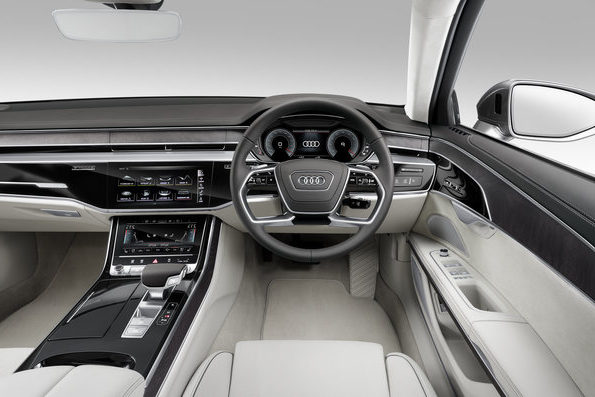 For most of the weekend he was with us, our grandson turned himself into the erstwhile MD of Auchers Ltd and marvelled at the array of gadgets and gizmos at the disposal of the rear passenger. And the amazing amount of legroom, complete with footrests.

There’s OLED rear lighting, a panoramic glass sunroof, massaging seats, a Bang and Olufsen sound system and a rear seat entertainment pack with two Audi tablet screens. The piece due resistance for junior though was a removable tablet in the centre armrest with which he could control and set a multitude of functions.

Effectively, the A8 L has more gadgets than a large branch of the late lamented Maplins and that’s probably where it scores more points than its opposition. 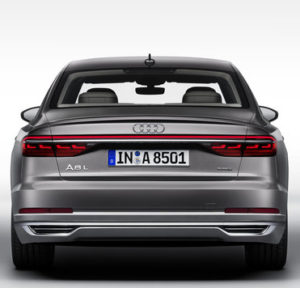 Up front, the legroom for driver and passenger is still impressive, and the expected level of impeccable finish that Audi are renowned for is evident. Lots of shiny piano back surfaces and top quality Leather. When it comes to interior design, Audi has the rest well and truly licked. No conventional dials here in a dash dominated by Audi’s Virtual Cockpit with its big infotainment screens.

Its LED matrix lighting system is as impressive as it sounds, providing incredible vision and effectively and automatically sensing and adapting to what’s on the road ahead in fractions of a second.

In the main it has a soft and comfortable ride, well controlled if a little wallowy, wafting it serenely along with the merest swish of wind noise. And quattro is now standard on all A8s so its overall poise is not in question.

It has the classic long, low lines of the A8 and a bit more.

And of course one of its many top class features is that everything is so effortless and accomplished without any fuss. You’d be hard pressed to know that it’s a diesel working away under that long bonnet. The 286ps diesel is better on fuel than the 340ps 3.0 litre petrol and with its forte being gobbling up big mileages while carrying its passengers in maximum comfort the diesel probably makes the most sense.

It strikes a decent balance between performance when required and running costs.

FOR: Still unmistakably an A8, which is no bad thing.
AGAINST: very stiff competition.