IT had to happen. It was inevitable that someone would taken a small city runabout and turn it into something that people would actually want to spend their hard earned cash on just for the hell of it.

A car that would bring the smile back to faces, many of whom would remember those halcyon days when the Golf GTI ruled the ‘smiles per mile’ stakes.

VW’s up! GTI is such a car, and followers of facts and figures won’t lose sight of the fact the little GTI has dimensions, kerbweight and performance that broadly align with those of the original Golf GTI. But brought bang up to day, obviously.

A quick potted history of Volkswagen small cars: the Fox has been culled, a car that never really floated my boat and was guilty of signing the death warrant of the brilliant little Lupo, a town car with character and a sense that it was exceptionally well put together and therefore a safe bet for the other woman in my life (my daughter) to drive around in.

The up! was unveiled as a concept at the Frankfurt Motor Show back in 2007, it was then substantially evolved, ready to make its public debut at the 2011 show in the same city. 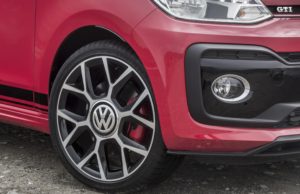 And there are plenty variants – six in fact, including the e-up! which one would guess goes down a storm in Yorkshire…..

But it doesn’t feel like that inside with just about enough space for four adults due to its 2407mm wheelbase, which is one of the longest in the segment, combined with an engine that’s mounted well forward.

The steering through the leather clad multi function wheel is light to the touch but with a lack of vagueness so you always know what the wheels are up to. The interior has a chic, classy look to it, with decent quality plastic used throughout. VW quality plastic in fact. 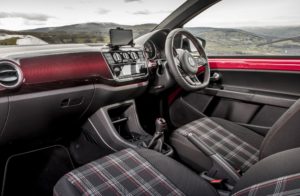 Evident are all the usual GTI touches – dash pad in red 2D pixels, unique GTI gearknob with red detailing and classis tartan-effect seat trimming. GTI badging and some red strips give the game away externally, as does the noise the chrome tail pipe spits out.

Bearing in mind its modest size of just 999cc and one cylinder short of the full four, the performance is impressive, as is the sound it makes. 115ps, 200Nm, an 8.8 second 0-62 time and a top speed of 122mph from something this small means it easily earns that GTI badge.

It’s one of the first VW cars to launch with a close-coupled petrol particulate filter, which reduces particulate emissions by up to 95 per cent.

Ride quality feels firm but not over-firm despite being lowered by 15mm It’s unlikely to be solely used in city traffic so the ability to take on all comers in terms of road surfaces is a distinct advantage.
The three door up! GTI is £14,055 and the five door £400 more.

It has a luggage capacity of 251 litres, or 959 litres with the rear seats folded.Put another way, compact and bijou, Mostyn.

Neat inside, neat outside. It’ll shut up! (!) those knockers who claim you can’t have fun in a city car. Because you can.

FOR: good things DO come in small packages
AGAINST: Addictive!